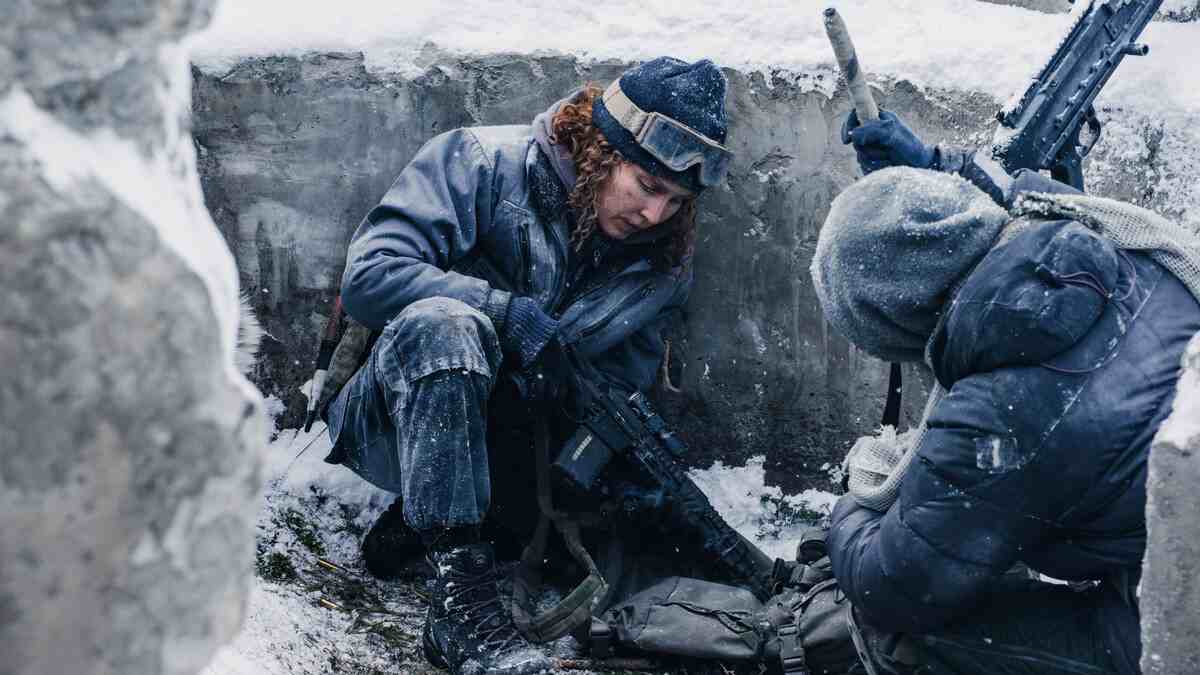 Black Crab is a Swedish (dubbed) post-apocalyptic action thriller on Netflix. It’s not very good. The film has the look of an anti-war movie made in the 1950’s. From the beginning of Black Crab, you never are quite sure who are the good guys and who are the bad guys. That’s likely intentional, but also confusing. Who are the Swedes(?) fighting and why? Are the soldiers/terrorists trying to kidnap Caroline and her daughter, or kill them? Some time later, Caroline gets orders to report to HQ. And, that’s about as much clarity as you get.

Upon further study, Black Crab takes place in an unknown country in imaginary cities of Tessenoy and Odo. Unsurprisingly, the known country of Sweden just happens to have a specialized unit trained to operate in the harshest of conditions like this one. In any case, the “good guys” will lose the war unless two canisters cross 100 nautical miles of ice behind enemy lines. Inconveniently, the ice will only support soldiers on ice skates. “If you succeed, the war is over. If you fail, the war is lost.” Just what’s in the canisters? “The canisters must not be opened.”

Convoluted and with poor production values, I give Black Crab 2.5 Gavels and it receives a 56% Rotten Tomatoes rating with a poor 5.7/10 IMDb score.

Caroline Edh knows a suicide mission when she sees one. Yet, Colonel Raad promises she will reunite with her daughter in Odo. No one knows the archipelago better than Caroline. But, can she trust her team. Lt. Nylund almost got her killed once, then shows up as a late replacement. Karimi is more concerned about his girlfriend abandoned at his previous post than Operation Black Crab. Not far from the start, the unit loses its Captain to, what else, thin ice. Can Caroline even trust her superiors?

Fresh off Jack Ryan, Noomi Rapace stars as Caroline Edh. A good actress is a terrible thing to waste, but wasted she is, behind improbable stunts in a muddled script. Jakob Oftebro (Max Manus) is the enigmatic Lt. Nylund, but is he friend or foe? The haze of the fog covered ice smothers the rest of the cast..

If you have a weak stomach, bodies frozen under the ice in Black Crab (see below) will do you no favors. Actually, the picture is a poor representation of the scene in the film. It looks much, much worse. What starts out as a film with possibilities turns south once the viewer learns the contents of the capsules. At that point, the “thriller” becomes a morality lesson. Add in a terrible ending and you wish you spent two hours playing checkers.

“A pacifist parable taking a brave stand against nothing, totally removed from the sociocultural landscape of today’s Sweden, it sounds out like one of Caroline’s screams into the howling Scandinavian wind – impassioned, futile, heard by no one.” Guardian

“Hews to the traditions and tropes of the ‘suicide mission’ combat genre and is only really surprising in how they botch the anticlimactic ending.” Movie Nation

Rare that a movie gets progressively worse, but Black Crab manages to crack the ice. Please don’t fall through.