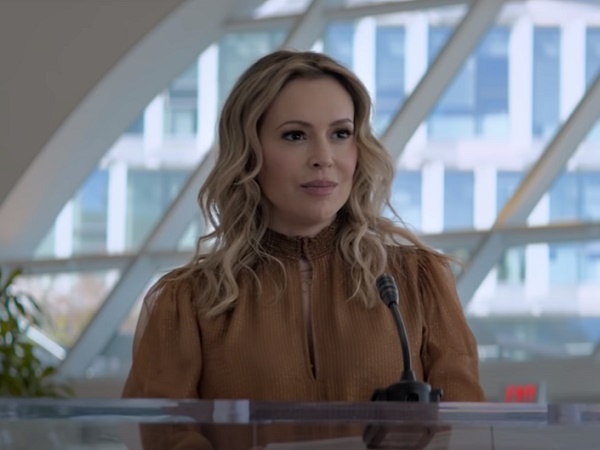 If Amazon paid $100 million for Hotel Transylvania 4, Netflix must have paid $1.98 for Brazen. Just how Brazen must you be to contend this film is the third most watched film on Netflix today? As a romantic thriller, it should be re-named Where Sparks Go To Die. The two leads have all the chemistry of oil and water. In 1988, Nora Roberts wrote the book Brazen Virtue. It received the 1989 Golden Medallion Award for Best Suspense. Somehow, the director managed to take all the suspense out of the story and telegraph the conclusion.

With such dialogue as “this is personal,” and “once isn’t going to be enough,” the viewer is certain he’s stumbled upon a Lifetime special. But, author Grace Miller and D.C. police detective Ed Jennings stumble through Brazen, oblivious to how folks talk in the real world. Absent the lovely cherry blossoms, Brazen and our nation’s capitol have little going for it. Police Captain Rivera gets my vote for the worst characterization of a police captain EVER. “You have a twisty mind” so I’ll make you a consultant, as if that ever happens. From the teacher-turned-dominatrix/victim theme to the go-to detective just happens to be my hot neighbor, the entire premise is a joke. I give Brazen 1.0 Gavel and it receives a 17% Rotten Tomatoes rating with a 3.9/10 IMDb score.

Author Grace Miller rushes to her sister’s home in Washington, D.C. after a frantic call for help. Desperate for funds to seek custody of her son, Kathleen Morgan needs Grace’s signature to secure a second mortgage. When Kathleen ends up strangled, her ex becomes a suspect along with her customers at Fantasy, Inc. After a mere 24 hours in D.C. and already “involved” with the hunky Det. Jennings, Grace demands inside access to the case. Jennings and his partner, Ben, are not so sure. Just how does a beloved teacher become an S & M favorite?

If Brazen were a major film, Alyssa Milano (Grace) would be in line for a major Golden Raspberry. Since it’s not, she will be mercifully ignored. As near as I can tell, Sam Page (Ed) is trying for a world record for most appearances in TV movies. Rest assured, Brazen will do nothing to raise his profile. The only actor playing this straight is Malachi Weir as Ben. To his credit, he mostly stays in the background and cringes.

Did you know “there are killers in every tax bracket?” Or, that there is such a thing a “case-closed adrenaline?” Okay, by now, this IS getting personal. Brazen is bad, just bad.

“Leave the bad made-for-TV movies to the networks that started it all.” Paste Magazine

“It’s not boring bad, but flashy bad. It’s not ‘I’m sick of this, already.’ It’s ‘I can’t believe what I’m looking at.'” San Francisco Chronicle

Pay no attention to the Chronicle. It’s boring bad, too!