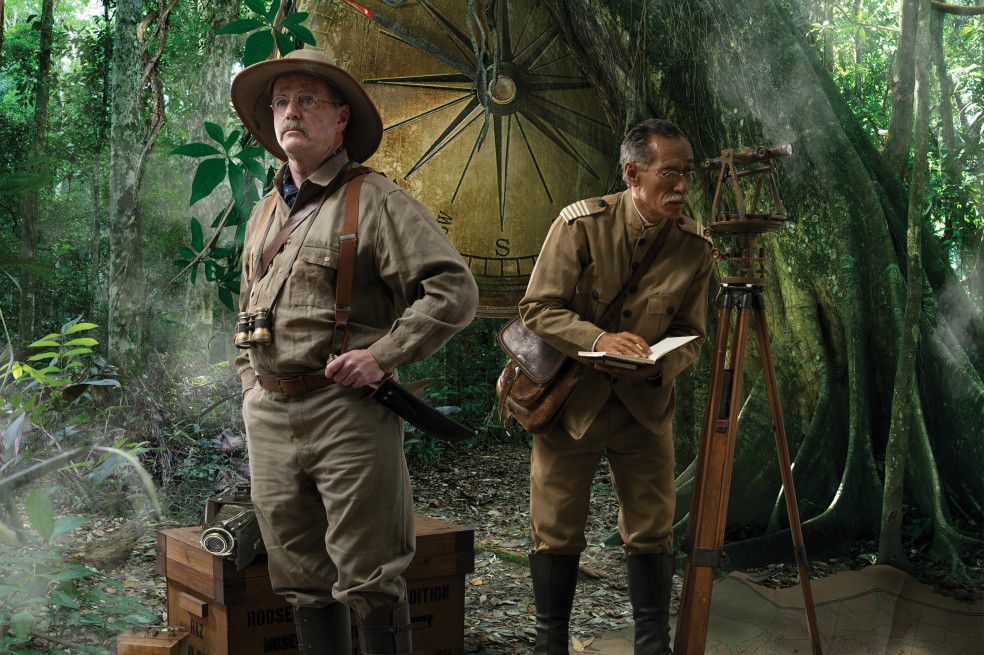 In The American Guest, a 55 year old overweight former politician with a bullet still lodged in his chest decides to explore the Amazon. Such is the life of Theodore Roosevelt. Two years earlier, as he campaigned for a third term, this time in the Bull Moose Party, he refused medical treatment after being shot until he completed his 80 minute speech. Running against the incumbent, William Howard Taft, and Woodrow Wilson, he lost. Two years later, wife Edith understands something is missing in his life. Besides, they need the money and their son, Kermit, is in Brazil.

Popular abroad, Brazil welcomes The American Guest. At a speech, Teddy meets Colonel Candido Rondon, “a humble engineer serving his country.” He has experience stringing telegraph lines through the jungle. Rondon knows the River of Doubt to be unexplored and his country wants a survey. They form a partnership. Soon, their different views of the world will clash. Along the way, the viewer gets a reminder of Roosevelt’s accomplishments as President, and the hazards of the Amazon jungle.

“A drunk, a priest, and two colonels head off into the wilds. It sounds like the beginning of a joke,” worries Edith. Kermit’s fiancée plans a wedding in Madrid in two months. Rondon’s daughter gets married April 29, 1914. The trip begins 2/2/1914. As they met hostile natives, pacifist Rondon’s motto is “to die if necessary, to kill never.” “It is best to leave gifts on the ground and run. This is their land.” That’s a long way from “speak softly and carry a big stick.” The jungle is about to take its toll.

Aidan Quinn plays The American Guest, Teddy Roosevelt. Beside him, Dana Delaney is wife, Edith. Both are excellent in this Brazilian production. J.P. Morgan has the role of the foil to Roosevelt, especially when much of the 200 million acres set aside for national parks was his, or his friends’, property. Trevor Eve (Unforgotten) gets that part.

Both history and environmental lovers should put The American Guest on their to-do list. Many consider Theodore Roosevelt to be one of our top five Presidents, although overshadowed by FDR. Certainly, he had no problem taking on the rich and powerful. The tussle between J.P. Morgan and Teddy, alone, is worth the time. And, you get the added benefit of watching Ohio’s own William Howard Taft come to the forefront.

Dropped on HBO from Sept 27 to Oct 18, one would assume some critics’ reviews by this time. What do they have against HBO Brasil? Whatever the case, The American Guest is likely to fill the gaps in your education. It’s a sad commentary that it takes Brazil to do it. Bravo, Rio Roosevelt!