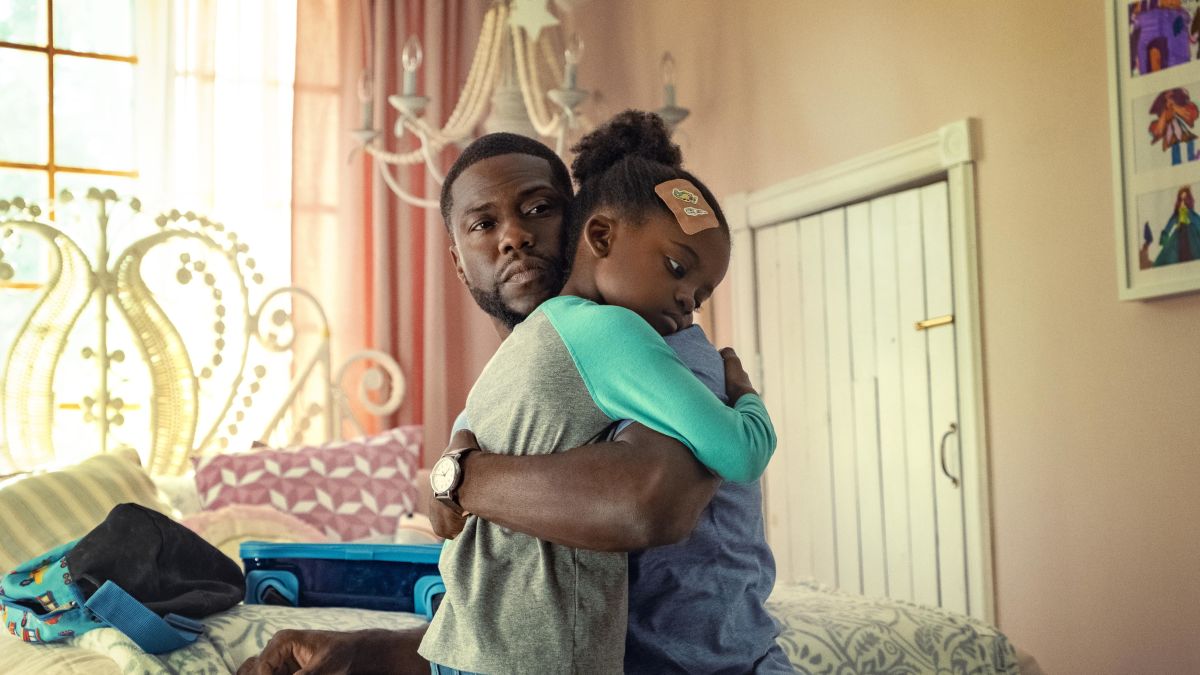 In another “inspired by a true story,” Fatherhood follows the 2011 book Two Kisses for Maddy: A Memoir of Loss and Love. (Find more on the true story in Time and a picture of the real Matt and Maddie Logelin at the bottom of this article.) Matt struggles with the loss of his wife. Understandably devastated, no one thinks him capable of raising a baby on his own. Colic and job responsibilities conspire against this man wholly unprepared for Fatherhood, at least on his own. The real Matt wrote a daily blog about the “chaos.” So, why not move back to Minnesota for help from family and friends?

Set in Boston (though mostly filmed in Montreal), the first half of Fatherhood focuses on the care of a baby, the latter half the raising of a five year old girl. Expect lots of grief, frustration, and guilt early in the movie. The maternal grandmother has such concerns that you expect her to file for custody at any minute. Fatherhood, itself, loses focus as it can’t figure out whether it wants to be a drama or a comedy. Just as you are about to give up on it, the inclusion of Melody Hurd as Maddie Logelin gives it a shot of much-needed adrenaline. She’s not just a scene stealer, she’s the best actor of the lot. I give Fatherhood 3.5 Gavels and it receives a 67% Rotten Tomatoes rating with a 6.7/10 IMDB score.

The Logelins still have a few things to finish as Maddie arrives two weeks early. Liz Logelin dies 27 hours later of a pulmonary embolism. Solely expecting to be the family provider, Matt knows little about babies. Learning will be much harder than he ever dreamed. His mother tells him “that you just have to do what’s right for her for the rest of your life.” But, his boss reminds him that “this is a place of business, not a place of babies.” Poor Matt! He’s even less prepared for the trials of a young lady in kindergarten.

Although Kevin Hart (Jumanji) gets praise from some critics as Matt Logelin, he’s much less comfortable as a dramatic actor, and it shows. He just can’t quickly turn on and off that comedic presence, so it almost never appears. Alfre Woodard (The Lion King) stars as Marian, Liz’ mother, who never did quite believe in Matt. His initial efforts at Fatherhood do little to allay her fears. Lil Rel Howery and Anthony Carrigan try to add some comic relief as Matt’s friends, but mostly fail.

In the end, Fatherhood‘s message of “wherever you are, I wanna’ go there” saves the day. The viewer can’t imagine Matt leaving Maddie for a month on business in Croatia. Flowers to the new Liz with an apology “sorry, for being an idiot” is also a nice touch.

“It transitions Hart from playfully scowling cutup to earnest heartfelt actor, and it does so in a way that, at times, is genuinely touching, even as the audience can see every sanded-down conflict and market-tested beat falling into place.” Variety

“It’s all done with a good heart. Even the cliché moments are understandable.” Associated Press

Fatherhood is another “what might have been” film. It just has the feel of something missing.