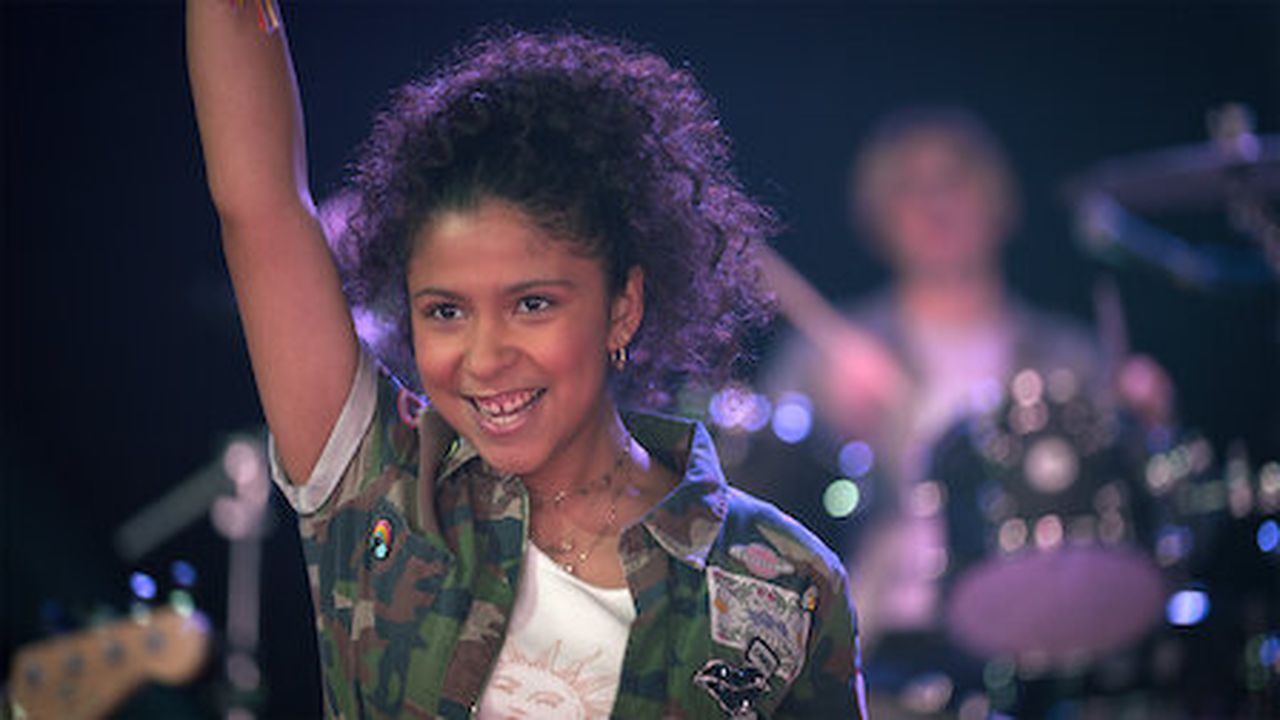 Julie and the Phantoms will likely test your patience. Just how much ghost silliness will you tolerate until you get to the music. Each of the nine episodes presents a new song, usually late in that portion. The songs and the associated performances are quite good. However, the acting and storylines will remind you why many of the original Netflix offerings leave much to be desired. Despite Julie and the Phantoms being about high school teens, the target audience is pre-teens. For the rest of the world, feel free to fast-forward until you reach the entitled song.

In 1995, the Sunset Curve band is about to go onstage at the Orpheum Theatre in Hollywood. As the fans line up, three members decide to grab a hot dog sold out of the back of an Oldsmobile. Needless to say, that did not end well, their dreams unfulfilled. Skip now to Los Feliz High school in 2020. To remain in the music program, Julie Molina must perform. She is unable to do so. How are these events related? It’s telegraphed pretty well. By episode three, you even get to see ghostbusters. Sadly, my endurance fades for Julie and the Phantoms. I wonder if Disney passed on this concept. Anyway, I give the series 3.0 Gavels and it receives a 93% Rotten Tomatoes rating with a 8.4/10 IMDb score. Apparently, someone likes the music!

Julie’s mother wrote music in her studio. Since her passing one year ago, Julie is unable to re-enter the garage. With her father listing the property for sale, Julie must now sort through her mother’s belongings. She finds an old Sunset Curve CD. Immediately, the ghosts of Luke (lead singer and guitarist), Alex (drummer), and Reggie (bass) appear. After much screaming, Julie realizes everyone will think she’s crazy. Yet, this turn of events is about to turn her world topsy-turvy. Julie is about to re-enter the music world with the help of “spirit musicians.”

In her first major role, Madison Reyes plays the confused, but gifted, Julie. Her acting and piano playing need work but her singing chops can’t be denied. All the others are forgettable, but I will mention Booboo Stewart. He has a minor role here, but you just saw him The Grizzlies.

Our friendly ghosts have the ability to walk through walls, etc. It is their ability to be seen by all during performances that confounds other spirits. Just what is their unfinished business? Once connected, does Julie really want her phantoms to disappear forever?

“It’s hard to be craggy watching newcomer Reyes belt a percussive, guitar-powered ballad. Her prodigious voice keeps you bopping along, even if the mischief starts to drag.” Hollywood Reporter

“It doesn’t really matter how much of it makes sense because its charm and really catchy music more than fill in the gaps. And it’s really charming.” The Daily Dot

There’s an old joke “sometimes I wake up grumpy. Other times, I let her sleep.” That’s about the level of dialogue in Julie and the Phantoms. Thankfully, I’m not a pre-teen. Giggle, giggle.