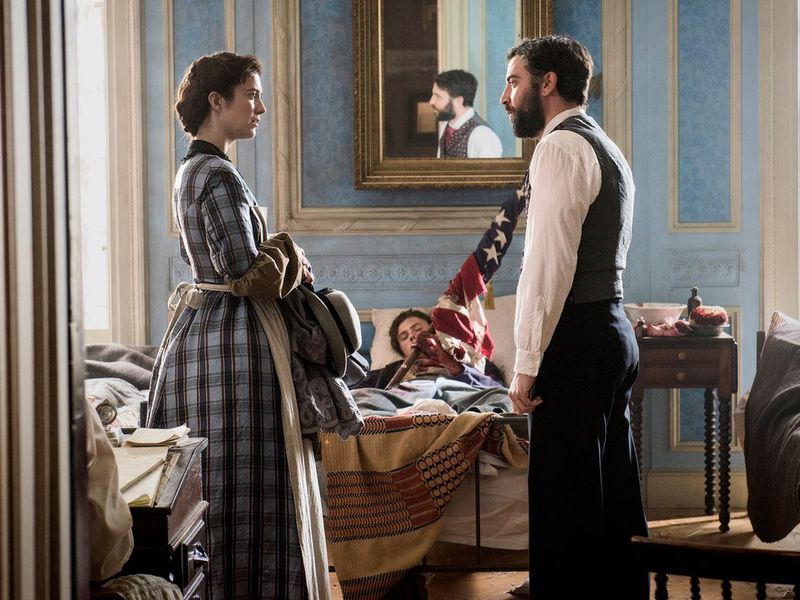 For a graphic depiction of Medieval medicine, feast your eyes on Mercy Street, another Masterpiece offering available on Amazon Prime. Actually, it’s 1862. But, Civil War medicine looks darn Medieval by today’s standards. Enlightening statistics tell us twice as many died from disease as from combat. In the year after the war, the state of Mississippi spent 20% of its annual budget on artificial limbs for its veterans. Against that backdrop, Mercy Street takes us to a hotel converted into a hospital in Yankee-occupied Alexandria, Virginia.

Splendid in costume and acting, the doctors and nurses argue over who gets treatment and what kind of care. As you might imagine, Yanks get priority over Rebs. And racism, profiteering, sexism, and many other -isms prominently figure in this two year, twelve part series. Episode three, in some detail, shows Dr. Foster amputating the leg of his brother. This show is not for the squeamish. I give Mercy Street 3.5 Gavels and it receives a 73% Rotten Tomatoes rating with a 7.5/10 IMDb score.

An ardent abolitionist, Mary Phinney wants to do her part to defeat the South. Without formal nursing training, an assignment to a military hospital is eye-opening. No one expects her to last. Even more naive is Emma Green, a Southern belle whose father owns the now-converted hotel. Over objections of her family, she insures the Confederate soldiers receive the same care as the Northerners. Nobody believes the war will last much longer. Clashes occur over and over, and strange bedfellows unite.

From the Die Hard series to Birds of Prey, Mary Elizabeth Winstead remains quite busy. As Mary Phinney, she carries the show. Hannah James is much less convincing as Emma Green. For fans of How I Met Your Mother, Josh Radner is looking for professional fulfillment as Dr. Foster. Will he also find romance?

Not all were as fervent as Mary Phinney. Head nurse Miss Dix states “men fight and women pray; it’s not up to us to opine on politics.” For those who note that medical advances are made during war, Dr. Foster’s boss notes “an unparalleled medical opportunity.”

“Mercy Street milks ample drama from the terrifying prospect of facing even the most minor of procedures in an era in which anesthesia was considered unnecessary and the most scientific testing involved sniffing.” Hollywood Reporter

“PBS is to be commended for delving into the stories of men and women of all backgrounds just trying to survive a meat-grinder of a war without losing their souls (or too many limbs).” Variety

Period pieces on Masterpiece tend to be from Europe. Finally, we get an American one.