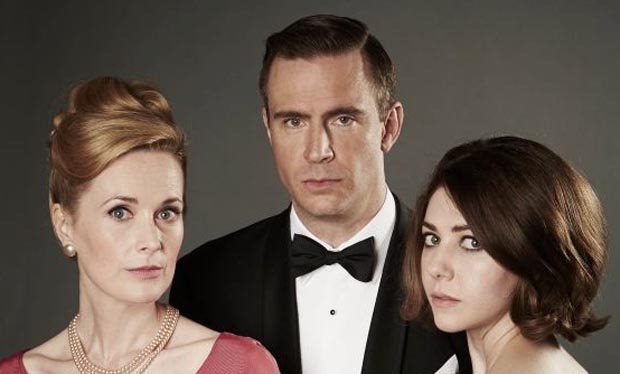 Before we discuss Breathless, the series referred to as the British Mad Men, let’s first digress and make sure you didn’t miss the Bill Maher Oscar rant (see below). For nearly seven minutes he eviscerates Hollywood. “I don’t have to leave the theater whistling, but would it kill Hollywood to once in a while make a movie that doesn’t want me to take a bath with a toaster? We all had a rough year, a little escapism would have been appreciated.” Quite vocally, he expresses the reasons no one watches awards shows anymore. “If your movies are so woke, why am I sleeping through them?” You might cringe at some of his comments, but you will likely agree with the sentiment.

If anyone wants to know how 1961 differs from 2021, Breathless may be the six-part Masterpiece series to watch. For the life of me, I can’t figure out the title. Is Dr. Powell so handsome that he takes your breath away? Who knows? With solid critical and audience scores, why did Breathless fail to earn a Season Two? Is it too controversial? At a time when abortions are illegal in England, Dr. Powell and crew feel a duty to assist young women who otherwise fall victim to the back-street abortionists. For example, one girl received a chemical douche, suffering internal burns. That alone spells CONTROVERSY!

Breathless is not all non-stop abortion, but additionally places front and center the many difficulties women faced on the 60’s. Women are expected to do as their male figures tell them. And, for the most part, the men are cads. Nevertheless, it’s an interesting perspective of the time period. I give Breathless 3.5 Gavels and it receives an 86% Rotten Tomatoes rating with a 7.0/10 IMDb score.

Angela Wilson arrives at New London Hospital to take her pregnant sister’s (Jean) place so she can marry up-and-coming Dr. Richard Truscott. Dr. Otto Powell, Chief of Gynecology, possesses great bedside manner with everyone except this wife, Elizabeth. But just what did Powell and anesthesiologist Charlie Enderbury do in Cyprus to cause Chief Inspector Ronald Mulligan to blackmail Elizabeth? Why is Mulligan forcing his daughter (Maureen) to marry? The roving eye of Dr. Truscott follows Margaret Dalton at the club, Escargot D’Or. Should she be worried?

Many of you will remember Jack Davenport from the NBC TV show Smash. He’s also seen in Why Women Kill which may be more apropos for his character, Dr. Powell. His nurse love-interest is Angela Wilson, played by Catherine Steadman, seen in Salmon Fishing in the Yemen. Clearly interested in his advances, she wonders if she should get involved with a married man. Her sister, Jean Truscott, didn’t tell her husband she lost the baby until after the honeymoon. Nothing about Jean resembles Zoe Boyle‘s former character, Jo Schirra, in The Astronaut’s Wives Club.

To its credit, Breathless presents at least one character who is against abortion. Problematically, she seems to be against it because it is illegal, not because of conscience. A little moral indignity would help give balance. Should Dr. Powell worry about the police? “Trouble choses us, not the other way around, says Powell with certainty that things always work out.

“Breathless is good at that; the 60s kitchens, the dresses, the Brylcreem and the buses, the Austins and the Morrises, the drink-driving. Also at the paradoxes of the age – the looking both forwards and backwards, the rampant sex and rampant sexism, the shiny new NHS and the lingering stuffiness etc.” The Guardian

“Doctors and nurses have been engaged in soapy doings since broadcasting’s infancy, but seldom in a package quite as tantalizing as Breathless.” Variety

Sub-plots abound in this show, so it takes awhile to figure out who’s who. While the abortion topic is the hook to get the viewer to watch, and remains in the background, the show soon veers onto more familiar territory. After episode two, this is pretty typical Masterpiece fare.