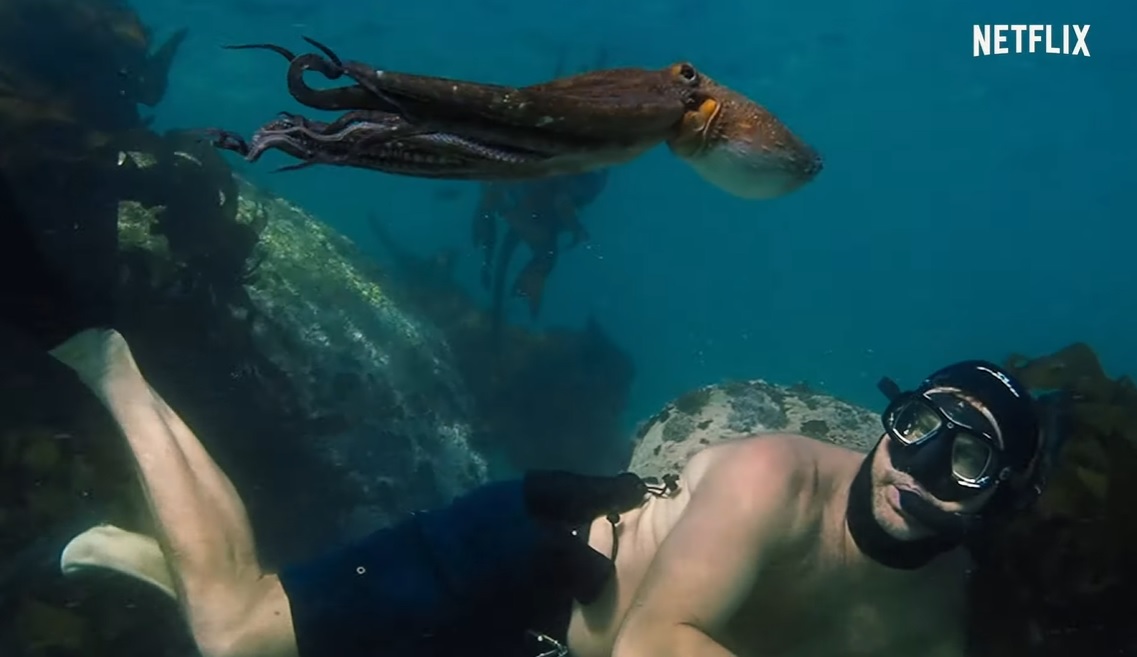 Whether or not you enjoy nature documentaries, My Octopus Teacher should grab your attention. First, it takes you to a part of the world almost never seen. Who else takes you to the kelp forest off the Western Cape, South Africa aka the Cape of Storms? Sounds foreboding, doesn’t it? Where will you see an octopus stretching out its arm to touch that strange creature we know as man? See the octopus hiding in his den surrounded by small caves within which the aggressive pyjama shark seeks its next meal. Most of all, you will see an invertebrate with the intelligence of a cat or dog. Watch it play and watch it learn. My Octopus Teacher is the best nature documentary since Tiny World and akin to the best Disney Nature films.

My Octopus Teacher (octopus vulgaris) only lives about one year. The female dies shortly after her eggs hatch. Filmmaker Craig Foster, almost entirely by chance, finds, interacts, and follows an octopus on a daily basis for nearly a year. He watches in sheer terror as a shark chomps off one arm, then slowly sees it regenerate, The crab hunt is rather unremarkable for the octopus, but the lobster hunt takes some practice. To drill into hard shell mollusk, the octopus must learn and remember the exact spot on the shell. Perhaps most amazing is the lengthy chase by another shark wherein she hides by wrapping in kelp, climbs out onto a rock, covers herself with shells and eventually rides on the shark’s back. It takes cunning to survive. I give My Octopus Teacher 4.0 Gavels and it receives a 100% Rotten Tomatoes rating with an 8.3/10 IMDb score.

Working too many hours, unhappy and not sleeping, Craig Foster needs a radical change in his life. He returns to the area of his childhood to rediscover the preciousness of life. Who teaches him? Oddly, it is a creature with incredible creativity to deceive. In water temperature under 50 degrees, Foster dives without scuba equipment and without a wetsuit. Will his obsession with the octopus be matched by its curiosity with him? What does it mean to be invited into the world of an octopus? Can an octopus teach you to be human?

Craig Foster‘s filmmaking career began in Africa. Learning from the best trackers in the world comes in handy when trying to spot an octopus. My Octopus Teacher is entirely his narration with a few scenes of his son, Tom. Ultimately, the result is not only this documentary, but also the founding of Sea Change Project, to protect the kelp forest.

Did you know that an octopus may lay 500,000 eggs although only a handful will survive? As you might expect, the visuals in My Octopus Teacher are stunning. The photos herein give you a quick glimpse into the abilty of the octopus to use camouflage.


“The lovely, incredible My Octopus Teacher will have you tearing up while you learn about the creature that forms an unusual friendship with a human.” OurQuadCities

Whether looking for a family or educational film, or just something relaxing, My Octopus Teacher will fill the bill.