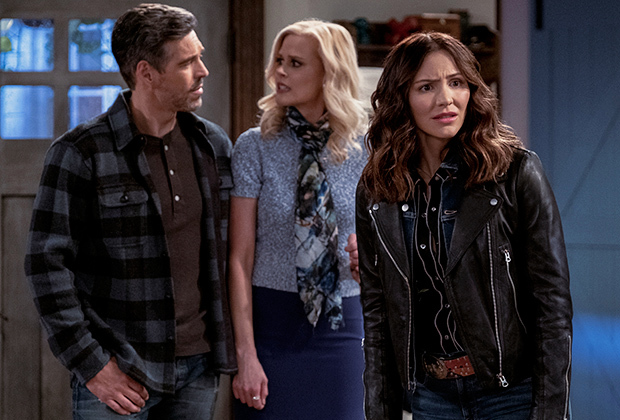 In Country Comfort, Netflix creates a new genre. It’s called situation-pathetic. Sit-coms should be funny; this one is Country Uncomfortable. This may be the worst first episode ever seen. Have any of these actors ever been in Nashville? Each tries their own version of a twang that sounds more like a screech. The characters are all cliche. Maybe the music might make it tolerable if you can make it that far. Seriously, this was twenty excruciating minutes. There will be no more!

If they are trying to make this a Southern Sound of Music, the producers are two kids and some Nazis short. Country Comfort gives us a reluctant singing nanny to a widower’s five children who no longer have music in their house. Of course, the master of the house has a girlfriend who tries to be motherly but the kids can’t stand. Sound familiar? Maria had the option to go back to the Abbey. Sadly, Bailey is stuck with nowhere else to go. For all her talent, Katharine McPhee is not a comedienne, at least not yet. She appears uneasy in the role with a disjointed laugh track that does her no favors. From American Idol and Smash, Country Comfort is a big step down. I give the first episode .5 Gavels and it receives an early 5.1/10 IMDb score.

Bailey and Boone are the perfect couple, in a band, headed for stardom. So she thought. Boone decides the band needs a change, and after nine years of struggles, the change is her. Driving blindly in a storm, her vehicle conks out adjacent to a Beau’s house who just happens to be expecting to interview a nanny. Forced into the basement by a tornado warning, Bailey begins to bond with the children, each for different reasons. Summer, Beau’s girlfriend, not pleased to have competition, reminds all that Bailey has no experience as a nanny. More than anything, that likely seals the deal. Now, what could possibly go wrong? Will Bailey ever get to sing again?

For country fans, LeAnn Rimes (Logan Lucky) appears as herself in one of the ten episodes. Did the fact that her husband, Eddie Cibrian, plays Beau have any part in securing her services? You might remember him from CSI: Miami and the short-lived The Playboy Club. Jamie Martin Mann plays the oversexed Beau’s second son and Griffin McIntyre is the inevitable materialistic youngest son. If you want to see Exhibit “A” for overacting, watch these two in particular. I blame the director.

“The show lacks any real signature other than a put-on, gaudy raunchiness that seems likely to alienate families with young children — who might have seemed the likeliest to put up with this show’s vacuousness.” Variety

“So full of sitcom clichés that we were longing to watch better, more contemporary family sitcoms.” Decider

This is just bad, bad, TV. It’s bad writing, bad casting, bad directing, and most of all, bad viewing.