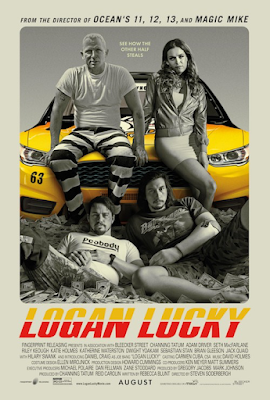 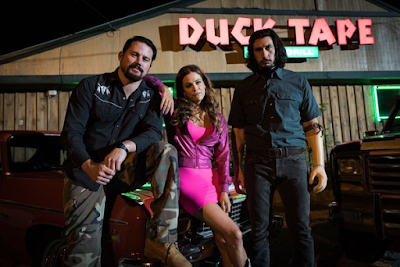 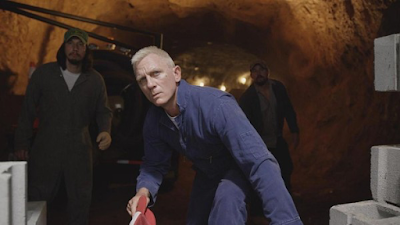 Hillbilly heist!  Redneck Robbery!  Ocean’s 7-11!  You will hear all these negative terms in this fun and wacky movie.  It is certainly different from the ordinary Hollywood fare that is foist upon us.  I guess negative stereotypes are permitted when the Appalachians turn out to be smarter than the bosses.  And, besides some great music, it has that darn cute kid again.  The director, Steven Soderbergh, touches all the bases

The Logan brothers are sure they are cursed.  Besides other family mishaps, high school quarterback Jimmy suffered a career-ending knee injury, then loses his job due to his “preexisting” injury that he failed to disclose.  Brother Clyde lost his hand fighting overseas for his country and is now a bartender.    Jimmy plans a theft of the proceeds at Charlotte Motor Speedway but needs Joe Bang to blow open the safe.  The problem is that Joe is in prison.  The second problem is that Jimmy is divorced and his daughter is to be in a talent show the same time as the race.  Finally, how do you fool the FBI?

The movie starts off slow as both Jimmy (Channing Tatum) and Clyde (Adam Driver) seem dim-witted and an unlikely pair to pull off a heist.  Sister Mellie (Riley Keough) seems to have more brains than both of them together and turns out to be quite a wheel-woman.  But the movie really picks up steam when Joe Bang aka Daniel Craig and his two brothers enter the picture.  Daniel Craig’s transformation from James Bond to hillbilly prisoner is nothing short of spectacular.  His two brothers discussing finding God is quite funny as is the Warden (Dwight Yoakam) telling everyone that “we don’t have no problems at Monroe Correctional.”  Finally, Hilary Swank tops off a fine cast as the FBI agent and she sure seems to signal that a sequel is on the way.  Katie Holmes plays Jimmy’s ex-wife and mother to Sadie, a very cute scene-stealer named Farrah McKenzie.

If you like John Denver, Nascar, country music, and/or Ocean’s 11, you will like this one.  It is just a “sit back and enjoy” movie as these “boys” (and girl) solve problem after problem without Mission Impossible technology. This movie should do well at the box office, and it’s one of the few movies I would like to see over again.  In the meantime, however, on to The Hitman’s Bodyguard.