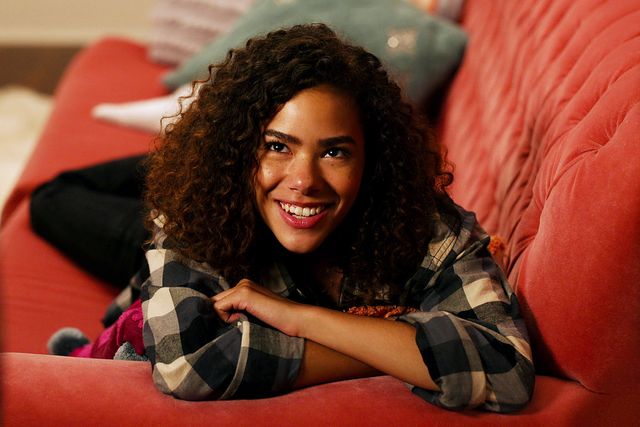 Ginny and Georgia gives you child abuse, runaway, shoplifting, armed robbery, revenge, and teen pregnancy, all in the first three episodes. And that’s just Georgia, thirty-year old mother of fifteen-year old, Ginny, and nine-year-old, Austin. She wants to compare mother and daughter to the “Gilmore Girls, but with bigger boobs.”

Lauren Graham was likable as Lorelai Gilmore; Georgia Miller is scheming and manipulative. Georgia will do whatever it takes to protect her children but, in her case, that inevitably leads to a dark and dangerous past.

Therein, lies the problem with Ginny and Georgia. Ostensibly, it’s a show for teens, as Ginny attempts to survive the rigors of a new town, new friends, and young love, all while trying to escape the embarrassment of her “irresponsible” mother. It sounds like normal teen angst, right? Except, the writers then put in every possible complication which makes it far-fetched. A will contest, a threat to expose a labor law violation, and overturning a planning commission recommendation for a marijuana dispensary give you some idea of the speed bumps in the viewed episodes. Those only involve Georgia, and 80% of the early episodes center on Ginny as she gets her first kiss, her first date, and loses her virginity. I give Ginny and Georgia 3.0 Gavels and it receives a 69% Rotten Tomatoes rating with an early 7.5/10 IMDb score.

To get a “fresh start,” Georgia moves her family to Wellsbury, Massachusetts, one of the “wealthiest cities in the U.S.” Ginny normally has trouble making friends, but immediately falls into the MAN clique, i.e. Maxine, Abby, and Norah. Maxine’s bad-boy, twin brother, Marcus, doesn’t do girlfriends,” while nice-guy, Hunter, gives her a hug after that first date. All the while, Georgia worms her way onto the handsome Mayor’s campaign staff. Life is good, if only her credit card wasn’t declined.

The first thing you notice about Antonia Gentry (Ginny) is her dazzling smile. With six acting credits since 2014, this twenty-four year old is the only reason to watch the ten-part Netflix series. Brianne Howey brings life to Georgia, except we don’t care. Additional episodes give credence to our initial suspicions. Direct from Schitt’s Creek, Jennifer Robertson plays a similar ditzy blonde character as neighbor and mother of Marcus and Maxine.

Dialogue like “hormones are coursing through my veins, I feel I’m in a board game and don’t know the rules” is pure teen. Of course, that’s not edgy and dark enough, so we veer off into self-harm. Why are we in Wellsbury? As a runaway, Georgia met Joe from Wellsbury who now happens to run the popular Blue Farm Cafe. It all seems a bit too contrived after fifteen years.

“Ginny & Georgia wants us to love the way that Georgia always manages to stay one step ahead… Instead, I kept hoping that Child Protective Services would finally catch up.” Entertainment Weekly

“Ginny & Georgia has its moments, but I’m not sure when dark became today’s ‘fresh and modern.’ A little too dark for teens.” Lola Lambchops

While Netflix contemplates a Season Two, I’m moving on. Wasn’t it Senator Lloyd Bentsen who said “I knew the Gilmore Girls, and Ginny and Georgia, you’re no Gilmore Girls?” Enough said.