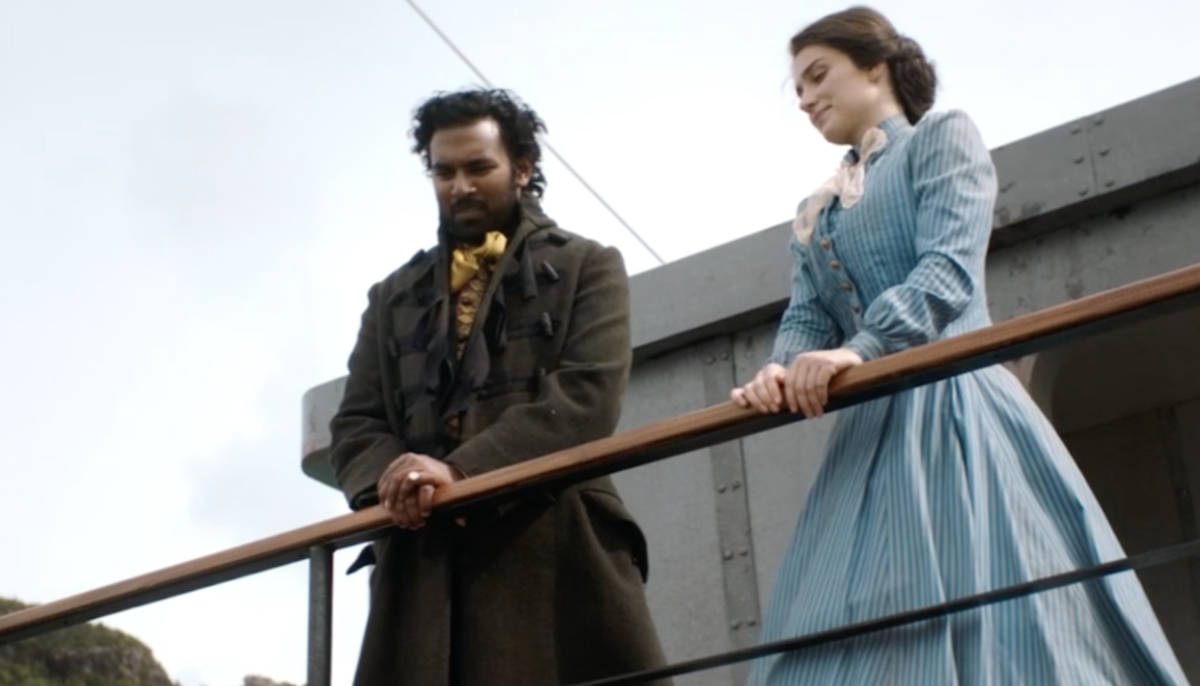 “Drat, foiled again,” and The Luminaries go hand-in-hand. Why? So spoiled am I by Netflix’ “down the whole series at one time” that I forget sometimes that Disney, HBO, Starz, and the like, still like the weekly methodology. Darn! So, this review is based upon only two episodes. Then again, “drat, foiled again” is at the root of The Luminaries. Anna and Emery meet on the ship as it arrives in Dunedin, New Zealand. Certain of love-at-first-sight, they agree to meet later that night. Persons of evil intent will conspire to make sure that does not happen.

Unlike Behind Her Eyes, The Luminaries lets you know early that cosmic forces may be at play. Since Anna and Emery share the same birthday, could they be astral twins? The proprietor of the House of Many Wishes, a fortune parlor, is Lydia Wells. There is not much she won’t do to separate the gold miners from their money. This six-part series on Starz peeks into the life of the New Zealanders during the 1866 Gold Rush. The scenery, costumes, and acting won’t let you down. It’s still a little early to say about the story. With the promise of hope, I give The Luminaries 3.5 Gavels thus far, and it receives a 61% Rotten Tomatoes rating with a 6.3/10 IMDB score.

Purse stolen and unable to read, Anna Wetherell fall into the clutches of Lydia Wells. Out of the goodness of her heart, Lydia agrees to make Anna her apprentice, read that eye-candy for the miners. Convinced by Francis Carver that Anna met someone better, Emery agrees to go into partnership to find gold in Hokitika. Nine months later, Anna is found unconscious near the body of Lydia’s murdered husband, gold sewn into the seams of her dress. She has no memory of the murder, but has Emery’s memory. How can that be?

For more background on the talented Eve Hewson (Anna), see Behind Her Eyes. In case you didn’t know, her father is Paul Hewson, also known as Bono of the rock group, U2. Eva Green (Lydia) has the high cheekbones and eyes of a model, used to great effect here, reminiscent of her role as Morgan in Camelot. Seen in the title role in Yesterday, Himesh Patel fills the role of Emery. Since the first two episodes focus primarily of Anna and Lydia, presumably we’ll see more of him shortly.

In 1866, the population of Hokitika swelled to 25,000, including 100 pubs. Commenting on the murder scene, the Sheriff wryly notes, “a politician, a savage, and a whore, in the middle of the night, in the middle of nowhere. It sounds like the beginning of a joke.” He believes Anna to have method and motive.

“It’s remarkable that the miniseries, which distills a novel of more than 800 pages to just six hours of screen time, retains such thematic depth.” Time Magazine

“Vastly entertaining and clever, and a great show for historical fiction fans who have already finished Outlander and Deadwood and need something new to watch.” Flickering Myth

I’m sticking with The Luminaries. New Zealand is beautiful this time of the year.