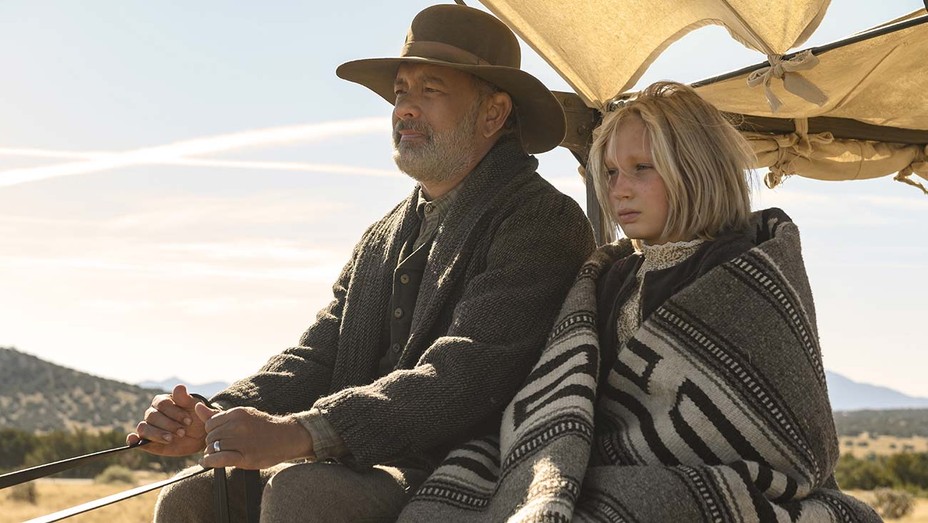 If Field of Dreams was Kevin Costner‘s testament to baseball and a time gone past, might not the same be said of Tom Hanks and News of the World? It should not be news to the world that News of the World is a fine film. Every role that Hanks inhabits draws you in. As a reader of the news and storyteller, who could be better? The inflation calculator tells us that a dime in 1870 would be worth $2.00 today. Who wouldn’t pay $2.00 to have Tom Hanks regale you with events of faraway lands?

News of the World runs at a slower pace. It takes six days by wagon from Wichita Falls to Dallas, then another three weeks to Castroville, four hundred miles in total. You learn a lot about folks on a road trip, and Captain Jefferson Kyle Kidd and Johanna Leonberger aka Cicada don’t speak each other’s language, in more ways than one. News of the World is at its best when these two interact, The director throws in some action, but without depth to the bad guys, it is a mere diversion to the melding of two souls with no family and no home. I give News of the World 4.0 Gavels and it garners an 87% Rotten Tomatoes rating with an 89% Audience score. The mIMDb rating is 7.0/10.

To folks who can’t read and have no access to newspapers, Captain Jefferson Kyle Kidd provides a service for ten cents per person. Travelling from town to town, he stumbles across an overturned wagon, a hanged Indian agent, and a blonde girl. The Kiowa killed Johanna’s parents six years prior; now her “adopted” Kiowa family is dead. Speaking no English, someone must deliver her to an aunt and uncle in Castroville. No one seems to have time for a traumatized girl, especially one raised “wild” by the Kiowa. No one, except Captain Jefferson Kyle Kidd.

In Tom Hanks‘ (Greyhound) first Western, Captain Jefferson Kyle Kidd rides a horse actually named Wimpy. He notes that “you don’t work with kids and animals because they steal the scenes.” In that, he is quite correct. Twelve-year old Helena Zengel, already a seasoned actress, is the real star of News of the World. In 2019, she became the youngest ever to win Best Actress at the German Film Awards.

After the Civil War, authority collapses in Texas. Too few federal troops are present to establish order. Those that are will confiscate weapons. So how do you protect yourself against those seeking to do you harm? Into this setting, Captain Jefferson Kyle Kidd seeks to remove Johanna from all the “pain and killing, to forget the past, and move forward with new memories.” Johanna disagrees, saying ” to move forward, you must remember the past.”

“Helena Zengel is a marvel. She can be wild in one scene, defiant later, curious the next and emotionally shut down in another. She speaks volumes even without dialogue.” Associated Press

“Gorgeously shot amid the caramel deserts and peppermint skies of New Mexico, News of the World is a worthy and intelligent footnote to the western genre.” Rex Reed

In 1870, Texas could be a violent, lawless state. News of the World reminds us that it was not without humanity. Should you pay $19.99 to stream it? If the theaters were open, you would.