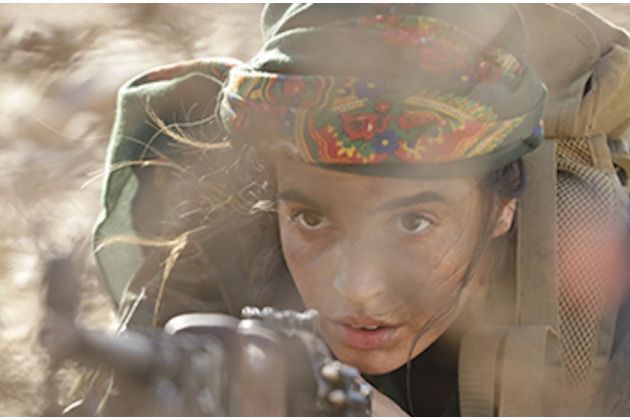 In a series compared to Homeland, No Man’s Land brings to the forefront the YPJ, the all female, mostly-Kurdish, militia units fighting in Syria. The Islamic State hates them. Why? If your death is at the hands of a woman, then there can be no martyrdom. In No Man’s Land, these women are fierce. They give no mercy, and expect no mercy. But, how did these women come to the fight, to a place that is anything but normal?

The “foreigners” in the Syrian civil war all have their reasons. Nasser, Paul, and Iyad come from London to fight for ISIS. They know they can never go back home. Nasser previously fought for his country in Afghanistan. Why would he now fight for the enemy? Sarya, born in Syria, raised in Paris, returns to a country she barely knows. Further, the YPJ prohibits the establishment of any “relationships.” Is it her epitaph that “she fought with the people she loved to save the people she loved?” This eight-part series has lots of twists and turns, and sets up a Season Two nicely. I give No Man’s Land 4.0 Gavels and it receives a very fine 7.9/10 IMDb rating.

Estranged from her Parisian family, Anna dies in a terrorist attack in Cairo. Or, did she? Four years later, her brother thinks he recognizes her in a news video of the war in Syria. A combatant tells Antoine that a French-speaking woman named Shamaran is an ISIS killing machine. With little more, Antoine travels to Turkey and crosses the border into No Man’s Land. The YPJ doesn’t trust him; ISIS wants him for his head, literally. Did I forget to mention spies? What else would you expect in the Middle East?

Melanie Thierry is the beautiful Anna, her life cut short. It seems the real Anna had revenge on her mind. Seen in Fisherman’s Friends, James Purefoy, as Stanley, will allow you to see whatever you want to see, as long as you are going the right direction. But, most impressive is Souheila Yacoub, the leader of her YPJ unit. She is ferociously female.

My evening started with the first episode of I Hate Suzie, she of a glorious 94% Rotten Tomatoes rating. Needless to say, I hated Suzie and thankfully turned to No Man’s Land. Interestingly, a Marine tells us that their motto is not Semper Fi (always faithful), but rather Semper Gumby (always flexible).

Critics complain that not sufficient time is given to the Syrian civil war, nor to the YPJ, for that matter. There is truth in that if you want history. Still, this is not billed as a documentary. The genre says Drama, War, Thriller. As a thriller, it’s not as good as Homeland, but No Man’s Land finishes strong.