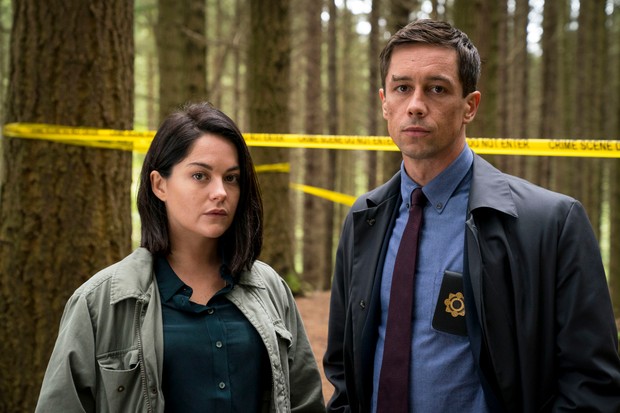 Not since The Sinner have I been so engrossed in a murder mystery as in Dublin Murders. Although the primary inquiry revolves around the death of a fourteen-year old girl, at least five different criminal investigations impact Detectives Rob Reilly and Cassie Maddox. The eight-part series on Starz is based upon two books written by an American living in Dublin. Actually, Tana French is such a successful author that a British publication refers to her as “the First Lady of Irish Crime.”

The body of ballet dancer Katy Devlin is found staged on a rock in the woods near Knockaree. Twenty-one years earlier, three kids entered those same woods and only one came out alive. Where are the remains of the other two? The question asked is whether this is a satanic ritual or a serial killer returned. Then again, a motorway is about to be built through the woodland. Katy’s father leads the opposition. Is there a connection? Brilliantly acted, beautifully filmed, and well written, Dublin Murders demands a Season Two. I give the show 4.0 Gavels and it receives a 79% Rotten Tomatoes rating with a 7.1/10 IMDb score.

Cassie insists that she and Rob must pass on the Katy Devlin murder investigation. Both know that secrets from their past disqualify their participation. Yet, Rob convinces her that they are best qualified to solve the crime. Superintendent O’Kelly shares a traditional toast with Rob and Cassie, “to the murder gods, may they reveal their f—ing secrets.” Ominously, Dublin Murders asks “what if the gods chose the killed because they are special. What if those left behind are the rejects?”

Previously unfamiliar with the work of Killian Scott, I note he worked with Liam Neesom in The Commuter. Likewise, Sarah Green appeared in Normal People, but in a supporting role. Well known in theater, she has a Tony to her credit. Still, this is their chance to shine, as one or the other is in virtually every scene. They are superb.

Are Rob and Cassie jaded, ruthless, cynical bastards? Murder investigators trend that direction. Even with no hint of rape, sexual abuse is always front and center in their minds. Yet, is that just another false clue in a sea of misdirection?

Properly descriptive, The Age (Australia) writes “some crime series captivate because the mystery itself is so maddeningly mysterious, while the lure of others is largely the frisson between the leading detectives. This Irish drama of tragedy and intrigue has both in spades.”

Caution: Dublin Murders is not always easy to follow with flashbacks, numerous characters with multiple identities, and multiple crimes. But, if you hang on, the journey is worth the ride.