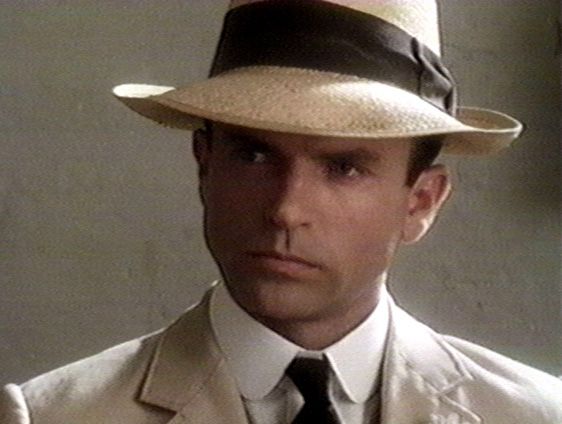 Reilly, Sidney Reilly, Ace of Spies doesn’t quite have the same ring as Bond, James Bond, Agent 007. Many think Reilly is the model for James Bond since fellow spy, Robert Lockhart, was a close friend of Ian Fleming. Fleming denied it, but the similarities are apparent. Nevertheless, for “a man who doesn’t exist,” Reilly, Ace of Spies may be the first modern professional spy.

How does one find Reilly? Amazon gives a free seven-day trial of Masterpiece Theater. Noting the starring role of a young Sam Neill and an 8.1/10 IMDb rating, it was enough to pique my interest. The fascinating, true story of a spy who almost overthrows Lenin and Stalin is just too good to resist. More on his adventures in a minute. The downside is that this is a 12-part series from 1983. As the quality of the pictures included here leaves much to be desired, so does the standard-definition quality of the show. Further, dressing up English actors as foreigners, wouldn’t fly these days. Still, where else can you see a young Bill Nighy, David Suchet, and John Rhys-Davies? I give Reilly, Ace of Spies 3.5 Gavels.

In 1901, England is in a battle with Russia over the control of oil fields. Desperate, the predecessor to MI6 sends a decidedly, ungentlemanly risk to Baku to steal plans for oil fields. Detained at the border, Prof. Rosenblum seduces a married woman to enable his escape. Pleased at his daring escapades, but alarmed that he would endanger a female, his superiors are perplexed. What to do? Send him, nka Sidney Reilly, and his new wife, the formerly Baku-imprisoned lady, to Port Arthur, Manchuria to assist the Japanese against the Russians. Reilly barely avoids execution by the Russians due to a direct hit on his jail.

In 1905, after numerous British agents were killed, Reilly is able to steal the plans for a new German war gun. Of course, once again, he seduces the young daughter of his landlord/coworker. All of this is just the precursor to events of 1918 whereby Reilly and his friends seek to overthrow the new Soviet government.

Sam Neill (Ride Like A Girl) comes to most folks’ attention in 1990 with The Hunt for the Red October. This is seven years earlier. Like Ian Fleming copied Sidney Reilly’s characteristics, Neill copies Sean Connery’s mannerisms. As the seduced vicar’s wife Margaret, Jeananne Crowley is nothing like the Bond girls of the 1960’s and thereafter. But, for 1901, I have no doubt she was quite the scandal. Of note, Reilly, Ace of Spies, marries twice more.

In reality, Reilly likely spied for England, Germany, Russia and Japan. Moreover, his goal was more monetary than political. That he survived as long as long as he did is remarkable. Lured back to Russia in 1925, some wanted to continue the use of his “services.” Stalin, he of the long memory, ordered him executed.

In 1984, The NY Times writes “Reilly: Ace of Spies is a mixed bag of pleasures, but it’s worth dropping in on, if not in whole, then at least in part.” Thereafter, in 2012 HistoryAccess.com noted “in the wake of Reilly, Sam Neill was supposedly considered for the role of James Bond as replacement for the retiring Roger Moore. Neill might have gotten the job if he had had the foresight to pump some iron.”  As noted, history is “murky” as it surrounds Sidney Reilly, but not boring.