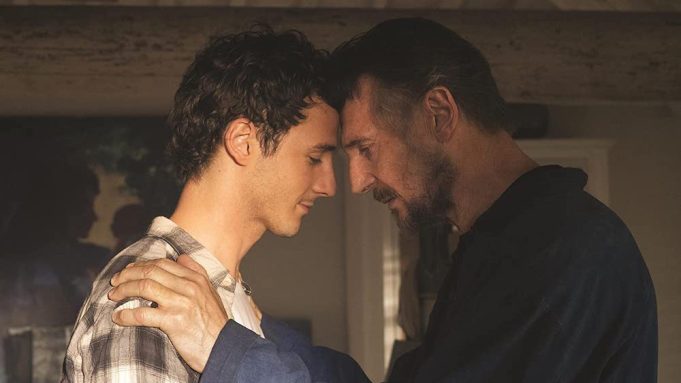 If you want to see a movie made in Tuscany, ignore Made in Italy and go straight for Under the Tuscan Sun. The brooding Diane Lane gives a much better performance than the brooding Liam Neeson. It is such a nice idea to team Liam and his son, Micheal Richardson, together in a film, except that was done before in Cold Pursuit. Fixing up a dilapidated house in Tuscany seems a staple. In yet another tired cliche, the handsome young star falls into water. The beautiful starlet laughs at him, only to be deliberately pulled into the pond which leads to giggling, kissing and the fadeaway.

In a case of art imitating life, Neeson’s wife, Natasha Richardson tragically died after a skiing accident in 2009. In Made in Italy, his wife died in a car accident some 15-20 years prior to the start of the film. As a result, Robert Foster no longer drives, nor paints. His daughter-in-law refers to him as a selfish prick. Unable to process his grief, his relationship with his son is strained. Such is the background for Made in Italy, which has the feel of made in a corner cafe, drafted on a napkin. I give the movie 2.5 Gavels and it receives a 51% Rotten Tomatoes rating with no Audience score as yet.

Jack Foster is the manager of an art gallery in London. His wife’s family wants to sell it and she wants him to sign the divorce papers. Desperate not to lose his livelihood, Jack turns to his estranged father, Robert, for help. For the last twenty years, their summer house in Tuscany sat abandoned. If they can sell it quickly, Jack can buy the gallery. Brought into the marriage by Robert’s deceased wife, the villa carries lots of memories, not all good. Will Robert cooperate in the sale? Will the pretty, single-parent, restaurant owner distract Jack?

The star of Made in Italy is actually a weasel who gets far too little screen time and, to my dismay, no film credit. So good in action films, so mopey here, Liam Neesom is Robert. In the fifth generation of a line of actors, Micheal Richardson plays Jack. Unlike six-time Oscar nominee grandma Vanessa Redgrave, he’ll get no such praise. Italian actress Valeria Bilello gives a nice performance as Jack’s love interest.

Other than the scenery, and the weasel, Made in Italy has little going for it. It’s pacing is slow, it’s mood is somber, the outcome predictable, and the characters carry little interest. “I know my way around a sun-drenched tomato” is the best of mediocre dialogue.