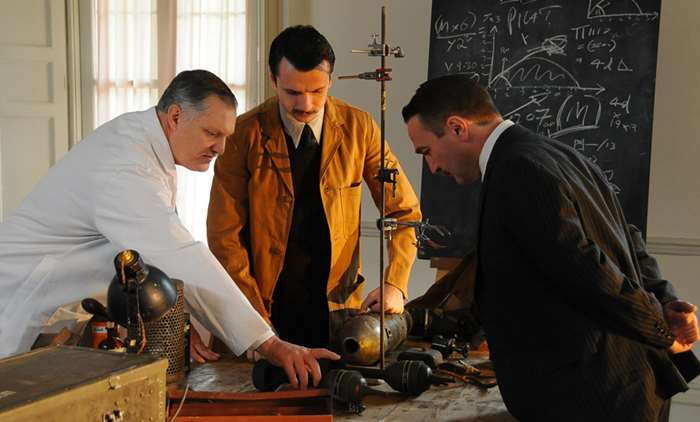 For a guy who grumbles about Hollywood playing loose with the facts, it may seem anomalous to think that Churchill’s Toyshop needs some Hollywood “pizzazz.” While interesting, this 46 minute documentary on Amazon could use some drama. After all, this is wartime. Similar to The Imitation Game and Castles In The Sky, these are eccentrics who assist the British war effort. Like Alan Turing and Robert Watson-Watt, the military bureaucracy is unimpressed. Winston Churchill has to intercede and take MD1 under his wing. Of course, who would think that candy, magnets, glue, and condoms would be used to make effective weapons? In irregular warfare, one needs inventors to think outside the box. Millis Jefferis and Stuart Macrae were two such men. I give Churchill’s Toyshop 3.0 Gavels and it receives a 7.3/10 IMDb rating.

In 1939, England is far behind Hitler’s juggernaut in war preparations. With invasion foreseeable, a small group forms to develop weapons for a counterinsurgency. Effective timing devices are critical. With some creative thinking, it turns out that aniseed balls and headache medicine dissolve at standard rates making them effective timers. Overlooked by the invasion of France and Dunkirk, MD1 develops mines that will sink to the bottom of a river, then float just off the surface and explode on contact. Operation Royal Marine drops 1700 mines into the Rhine River to halt German production in 1940. These “creative geniuses” are just getting started.

Since MD1 was top secret, and dismantled by the jealous Ministry of Supply bureaucracy after the war, very little archival footage exists. Prior to the war, Stuart Macrae is the editor of Armchair Science. Millis Jefferis is a former combat engineer and explosives expert. Their first project is the limpet mine, a timed explosive device to attach to the bottom of a ship. From anti-tank weapons and mines, to timers and switches, these were the elves in Churchill’s Toyshop.

In the long history of bomb-making, it seems odd that the timing device comes along this late in history. We’ve all seen how unreliable that those long fuses were. Once Jefferis and Macrae solve that problem, then a variety of other weapons follow. While ingenious, the development of weaponry begins to get repetitive by the time the story gets to the PIAT and the Hedgehog. RadioTimes goes overboard and crows that Churchill’s Toyshop is “Wallace & Gromit with bombs — cracking stuff.” That may be, only if you enjoy the same scenes over and over again. Repeated trial and error is slow, painstaking work and no documentary is going to make it exciting. If you are into the nuts and bolts of WWII weaponry, this may do it for you. My recommendation is to await the Tom Cruise version.