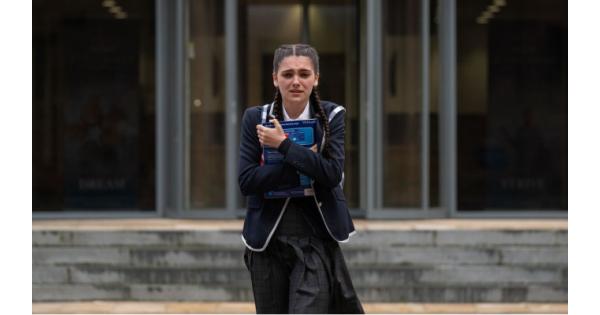 Don’t Get Mad (D.G.M.), Get Even! As these girls seek justice in their “rotten” high school world, are they villains or victims? Get Even is the tagline of the new Netflix (10 part, 25 minute each) offering from the BBC. But, I wonder the demographic for the series. The topics of bullying, teacher sex abuse, and murder seem too dark for the younger set. Besides really cool clothes and interesting music, Get Even seems too Nancy Drew for older teens, unlike say, Banana Split. Then again, if your only streaming service is Netflix, a murder mystery is a murder mystery. If only these four mis-matched characters were just a little more likable, then the show might be an easier sell. As for me, I give Get Even 3.5 Gavels and it receives 6/10 IMDb score.

Kitty, Bree, Margot, and Olivia barely acknowledge each other’s presence at snobbish Bannerman High until they are thrown together for detention. As they discuss the unfairness of it all, it is agreed that someone should do something about it. D.G.M. forms with Boss, Misfit, Genius, and Princess, mirroring their duties, as well as their personalities. D.G.M. decides to punish Ronny for stealing and publishing photos of Mika. When Ronny ends up dead, D.G.M., whoever it is, becomes the primary suspect.

Kim Addis, Mia McKenna-Bruce, Bethany Antonia, and Jessica Alexander form our intrepid justice seekers as Kitty, Bree, Margot, and Olivia respectively. All have acting experience, none well-known although Mia appears in The Witcher. As you might expect The Boss is the planner, The Misfit is the thief, The Genius is the techie, and The Princess is the distraction.

Apparently, the producers are confident of Season 2 as the show ends with the murderer telling Margot that D.G.M. is in danger. BBC likes it, but will Netflix streamers? The latter episodes give us some insight into the backstories of Olivia and Bree, but fail to include same for Kitty and Margot. This seems a major oversight if you want viewers to attach to the characters. Glamour thinks “Get Even is a Perfect Blend of Gossip Girl and Pretty Little Liars.” CommonSenseMedia writes “Kitty, Bree, Margot, and Olivia seem more like types than real people, and they don’t deepen greatly as the series goes on.”  In short, these girls go through burner phones faster than boyfriends. It’s solid, safe for teens, but assuredly will not raise their I.Q. level.