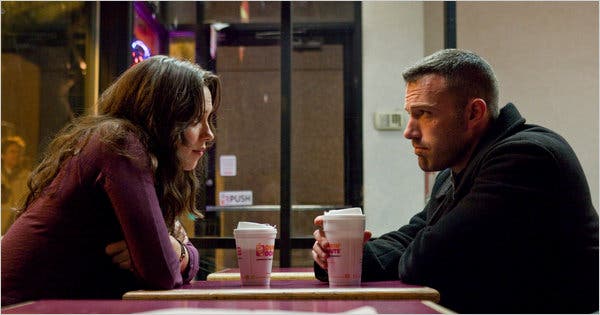 Ben Affleck loves his Boston Red Sox, and his crime thrillers. And, Fenway Park makes a nice backdrop for a robbery and shoot-out with the Boston police and the FBI in The Town, just available on Netflix. Be prepared for a gritty, violent film that showcases the fine talents of Rebecca Hall, Jon Hamm, Jeremy Renner, Blake Lively, Chris Cooper, Titus Welliver, Victor Garber, and Pete Postlethwaite, among others. The Town is a true ensemble movie, winning Best Acting by an Ensemble Cast by The National Board of Review. Also directed by Affleck, the movie receives several nominations for Best Film, and Renner gets an Oscar nomination for Best Supporting Actor. Not bad for a somewhat low-budget $37 million film which will gross $154 million worldwide. I give The Town 4.0 Gavels and it receives a 93% Rotten Tomatoes rating with an 85% Audience score.

Doug MacRay, and his Charlestown friends, rob the Cambridge Merchant Bank. As insurance for a safe getaway, loose-cannon Jem Coughlin decides to kidnap the bank manger, Claire Keesey. Told that if she talks to the FBI, they will rape and kill her, she is otherwise released unharmed. FBI agent Adam Frawley is unclear whether or not was a participant. Coughlin thinks she is a loose end. MacRay decides to follow her to insure that she is unable to implicate the gang. Love rears its not-so-ugly head.

Ben Affleck is his usual Boston-twang thespian as Doug MacRay. He allows Jeremy Renner to shine as Jem Coughlin, and shine he does. From a jet-setting companion in Frost/Nixon to bank manager/kidnap victim in The Town, Rebecca Hall shows nice range. Jon Hamm is a little too full of himself as Agent Frawley and Blake Lively goes against type as MacRay’s ex-girlfriend.

When Claire wonders why MacRay knows so much about witness-protection, he responds that he “watches too much CSI, CSI Miami, CSI New York, and Bones.” Me, too; those were the days! Coughlin tells MacRay that he will not do anymore time. “If we get jammed up, we are holding Court on the street.”

Richard Roeper crows that “as a director, Affleck now has two home runs in two at-bats. This is one of the best movies of the year (2010).” The Miami Herald notes “Affleck’s smooth, elegant directorial style is strong reminiscent of Clint Eastwood‘s: He takes his time establishing characters who are far more complex than they initially appear, then thrusts them into moral dilemmas with no easy outs.” If you enjoy this genre, Ben Affleck doesn’t let you down.