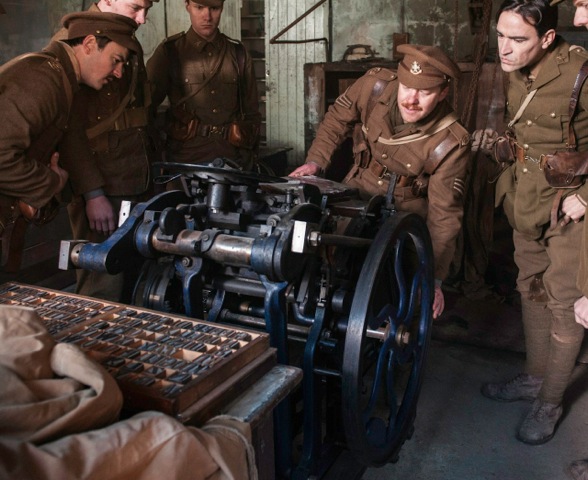 Jeepers Creepers, Wipers Ypres! In the proud tradition of M*A*S*H, Good Morning Vietnam, and Hogan’s Heroes, the World War I spoof by The Wipers Times fails spectacularly. Then, perhaps that was its intent. Like its forerunners, nothing is sacred, especially not the big brass who never visit the front lines. A part of the first issue of The Wiper Times appears below. Certainly, sending one to the front will a cure too much optimism. The Wipers Times doesn’t spare the war correspondents always reporting from the thick of battle except no one’s ever seen them. By British standards, the film has the wit, but is far too melancholy to be called fun. I give The Wipers Times 3.0 Gavels and it receives an 88% Rotten Tomatoes rating with an 80% Audience score.

Searching for material to shore up trenches, Capt. Roberts and Lt. Pearson stumble across a printing press, along with plenty of ink and paper. Appointing themselves editor and assistant editor, they start The Wipers Times. (Ed note: Although used for toilet paper, it is actually slang on the name Ypres.) Certain higher-ups were not happy to be parodied, but General Mitford overruled concerns about the perceived “lack of discipline.” After all, everyone needs a little sense of humor. Besides, who wouldn’t listen to a war song written by R. Tillery. (Get it?)

The Hawkeye and Trapper John of The Sherwood Foresters are Roberts and Pearson. Played by Ben Chaplin (The Legend of Tarzan) and Julian Rhind-Tutt (Banished), the film lives or dies by their performances. Unlike Hawkeye and Trapper, you just don’t feel like having a beer with these two.

“You’ve been the army of occupation. Now, you’ll be the army of no occupation,” quips Roberts at the end of the war. This turns out to be true for him as he, too, is soon looking for a job. Interviewing for a newspaper job, Roberts advises that he is a mining engineer by trade. When the editor questions the value of his experience, Roberts replies, “it was useful digging trenches, it will be useful digging up muck.

The Guardian points out that “yes, some of the paper’s actual humour – the (Hun) puns, the spoofs and spoonerisms, limericks and doggerel – may seem a little dated today. Of course – it is dated, nearly a hundred years old. . . And back then, this kind of black humour, satirical irreverence and downright silliness, must been have been the sharpest of cutting edge.”

While I am usually a sucker for a true story, this one didn’t stick. Maybe it was the stiff upper lip, maybe the darkness of the delivery of the “jokes.” Whatever, I will wipe this one from memory.