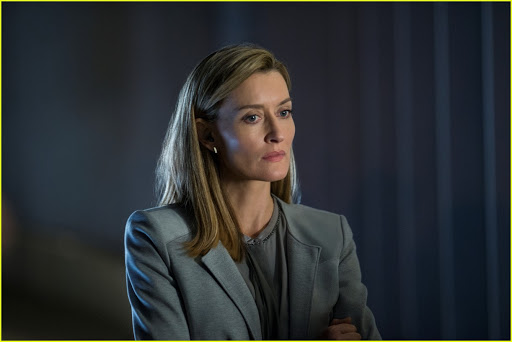 After a most pleasing romp through outer space with The Mandalorian, why not travel to Mars with The First on Hulu? Let’s hope NASA’s Mars Mission lasts a whole lot longer than Vista’s one season. Despite amazing photography, splendid acting, excellent holographic images and Beau Willimon, how do you manage only eight episodes? You might remember Beau as the creator of House of Cards. In The First, he came up empty-handed. There is more action in one episode of House of Cards than in all of this series. You might call The First a sleeper. Not because it is sneaks up on you, but because you can get a 15 minute nap in each episode and still not miss anything. A slow burn takes on a whole new meaning. I give The First 3.0 Gavels and it receives a 66% Rotten Tomatoes rating with a 78% Audience score.

Laz Ingram, CEO of Vista, removes Tom Hagerty as commander of Providence, the first manned flight to Mars. Despite three levels of redundancy, tragedy occurs just after take-off. Ingram has twenty-three months until the next launch window to manage Congressional investigations, secure funding, train the next crew, and resolve a problem with the Mars Ascent Vehicle. Those may be the easiest of the obstacles.

Despite two Oscars, Sean Penn is not particularly a favorite. Maybe, it’s his bad boy image over the years. But here, he does fine work as Tom Hagerty. Natascha McElhone is the cool, almost cold, Laz Ingram. Should she really be the face of Vista? Was Kayla Price (LisaGay Hamilton) demoted because she is female, black, and gay? Ms. Hamilton’s character is too often an afterthought.

Only 10% of the series is about space exploration. Mr. Willimon seems much more interested in exploring allegories. His character-studies are so in-depth that they become character-colonoscopies. The “art” overwhelms the concept. A sample from the critics:

“Providing all the attendant pageantry and triumphant music and inspirational speeches you might expect, before shifting back to the glummest, slowest, least enthusiastic approach possible to the material.”

“The First needs to up its game or it’s headed for the black hole of oblivion.”

Headed for the black hole, it is! The First becomes the last.