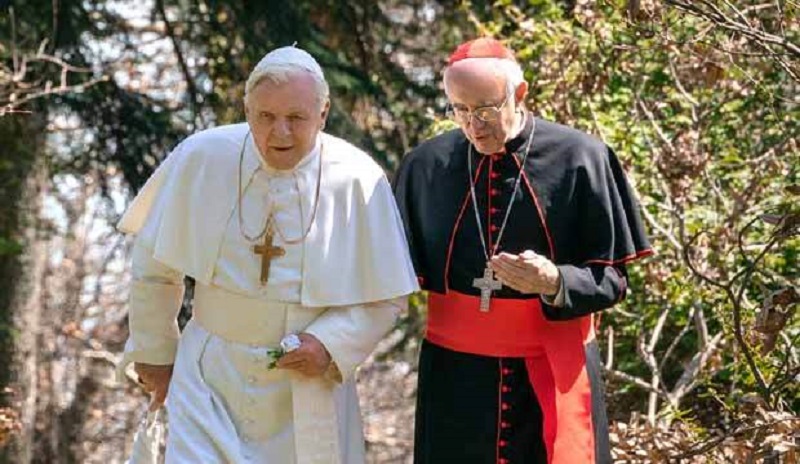 Americans are fascinated by two things that occur behind closed doors. If you guessed sex and marriage, you are probably correct, but my reference is the happenings at Buckingham Palace (The Crown) and the selection of the Pope. In a fictional meeting of Pope Benedict XVI and the future Pope Francis, The Two Popes is a “clash” as fascinating as Ali vs Frazier. Will every one enjoy the ideological differences between the conservative Ratzinger and the liberal Bergoglio? Not likely.

Still, there is much more to The Two Popes. Follow Bergoglio as a young man in love, and later as the head of the Jesuit order in Argentina “cooperating” with a murderous military junta. (What’s Fact and What’s Fiction in The Two Popes.) “Tour” areas in the Vatican and the summer residence. Watch two of the best actors of our time, mano a mano. I give the movie 4.0 Gavels and it receives an 88% Rotten Tomatoes rating with a 76% Audience score.

Cardinal Bergolio, unhappy with the direction of the Church, wants to retire. To do so, he must receive permission of Benedict. Unbeknownst to anyone, Benedict, too, wants to retire. No one has renounced the papacy since the 1200’s. Benedict is also concerned about the direction of the Church, his trusted adviser just arrested for leaking documents to the press. Against the backdrop of sex abuse by priests, does anyone have clean hands?

Anthony Hopkins and Jonathan Pryce are indescribably fabulous. Hopkins is the old-style Frazier and Pryce is the up-and-coming Ali. Pryce’s performance is the best of of the year. Both provide us with unexpected comedy, and even a little music. One critic referred to this as a “buddy” movie. I wouldn’t go that far, but I am ready to see them matched up again.

Set for release December 20 on Netflix, don’t let The Two Popes get lost in all the Christmas releases. Mark it down in your notebooks to savor as things settle down. Is this a “flight of fancy” as another critic puts it? Certainly! But, “for anyone interested in Catholic church doctrine, ‘The Two Popes‘ is movie nirvana, (and) anyone watching could appreciate the clash between these opposing dispositions and world views” (San Francisco Chronicle). Referred to as an unexpected hit at Telluride, the screenplay is by the same guy who wrote The Darkest Hour. This one is better than you think!