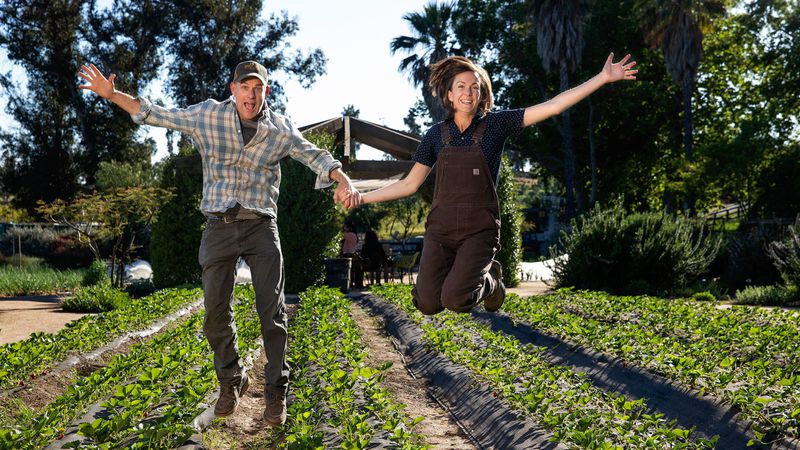 Raised on a farm, I believe The Biggest Little Farm should be mandatory viewing for all. Not for its ecological bent, but its message of hope is so crucial for humanity. Molly is so infectious, John so persistent, and Emma (pig) and Greasy (the ugliest rooster you will ever see) so compatible that this may be the best documentary you will ever see. It’s difficult to imagine that The Biggest Little Farm is this much better than the latest version of The Lion King. Both involve the resurrection of land that was no longer productive. Simba reluctantly eliminates Scar; John unenthusiastically kills a coyote. Just what does it take to live in harmony with the land? Apparently, you need at least seven years. I give this movie 4.5 Gavels and it receives a 91% Rotten Tomatoes rating and a 96% Audience score.

John (wildlife filmmaker) and Molly (traditional foods chef) adopt a dog, Todd. No matter what they try, he barks when they leave their Santa Monica apartment. A move to a farm (200 acres) one hour north of LA is in order. Except, they need investors (many who laugh), and a visionary named Alan. Alan explains the interconnections of life and its difficulties, but dies before the real challenges (bugs, birds, drought, coyotes, etc.) arise. Left to their own devices, John and Molly take one step forward, two steps back as they deal with Mother Nature. Yet, after seven years, they take 500,000 pounds of produce to the market.

John Chester and Molly Chester know little about farming. The farm they buy appears void of useful plants. They have the foresight to chronicle the success of bringing The Apricot Farm to life. There is no mention of the cost of a 200 acre farm in California, nor any return to investors. This is a real-life story of a “return” of the land.

Bonding with the animals, as well as the land, the Chesters’ film is not only educational, but gorgeous. John puts his wildlife-camera skills to great use. Throughout it all, the script remains engaging. As the critic for Variety points out, environmental documentaries tend to be “boring and alarmist.” The Biggest Little Farm is neither. It doesn’t skimp on the hardships, like feeding your destroyed peach crop to the chickens. The birth of animals is celebrated while noting that it comes with trials and tribulations. In essence, it accurately mirrors the life of farmers. As always, truth is better than fiction. This week, The Farm trumps The King.