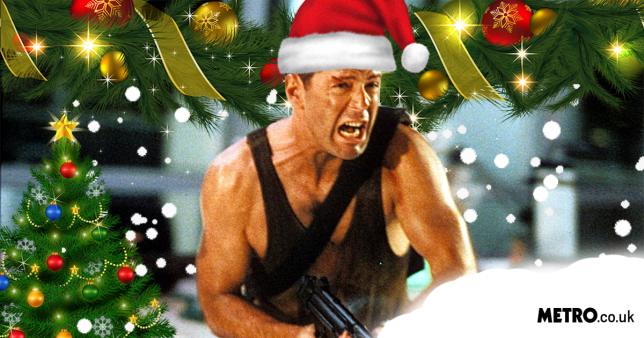 During this 2018 movie drought, it is imperative that we discuss one of the more complex issues of our time.  Many of you may not realize this, but the world of social media is abuzz about Die Hard.  The argument is whether or not Die Hard is a Christmas movie or whether it is a movie that just happens to be set at Christmas. You may say “who cares?”  But this issue is critical to all the list makers of the world.  For example, many say that Die Hard is the Greatest Christmas Movie of All Time.  Imagine how many Greatest Christmas Movies of All Time lists are screwed up because of this controversy.   It’s A Wonderful Life, A Christmas Story, Home Alone, Elf, and Love Actually are all unfairly demoted because of an interloper.  This debate must be settled!

Our hero, John McClane, an NYPD detective, arrives in Los Angeles on Christmas Eve.  The intent is to make nice with his estranged wife, Holly.  Unfortunately for them, the party at the Nakatomi Corporation skyscraper is interrupted by terrorists seeking $640 million in the vault.  This being Christmas, the LAPD is skeptical of a call from this unknown character until McClane drops a body on a police car.   The bad guys figure out that Holly is McClane’s wife and use her to reel in McClane.  Ultimately, McClane saves Holly, and in the proper Christmas spirit, Holly punches the arrogant reporter in the nose.

Welcome to the party pal!

Now I have a machine gun. Ho-ho-ho.

Come out to the coast, we’ll get together, have a few laughs…

Only John can make somebody that crazy.
More famous quotes
Holly Gennero McClane: After all this, you’re just a common thief.
Hans Gruber: I am an exceptional thief, Mrs.McClane!
Hans Gruber: You Americans are all alike. Well, this time John Wayne does not walk off into the sunset with Grace Kelly.
John McClane: That’s Gary Cooper, a—–.
Yippie-Ki-Yay, M—f—-!

The movie is set at Christmas.

The screen writer says yes but only because the studio rejected the Purim (a spring Jewish holiday) draft.

At his Comedy Central Roast, Willis declared “Die Hard is not a Christmas movie! It is a g–d— Bruce Willis movie!

It has great Christmas music.

In a new poll, 62% of Americans say Die Hard is not a Christmas movie.  Only 25% believe that it is.  Who votes in these polls, anyway?

While Die hard may not be the Christmas GOAT, it most certainly is a Christmas movie.  McClane as Santa, weary travelers, pregnant lady, Christmas music, romance, family love, and the final meeting of McClane and Sgt. Powell bringing a tear to your eye are conclusive evidence.

Willis is filmed with a fire hose around his waist and jumping during an explosion.  In reality, he is blown to the very edge of the safety airbag.  He asks why shoot this dangerous scene first?  Because, he is told, if he is seriously injured, they would have to re-shoot the whole movie.  Vicious!

The corporate headquarters of 20th Century Fox, Fox Plaza in Century City, serves as the film’s setting and was still under construction at the time of filming.  The floor seen in the movie became the office of former President Ronald Reagan.

At his character’s death, Alan Rickman falls 70 feet.   The look of surprise is real as they dropped him earlier than he was told.  Merry Christmas, Hans Gruber.