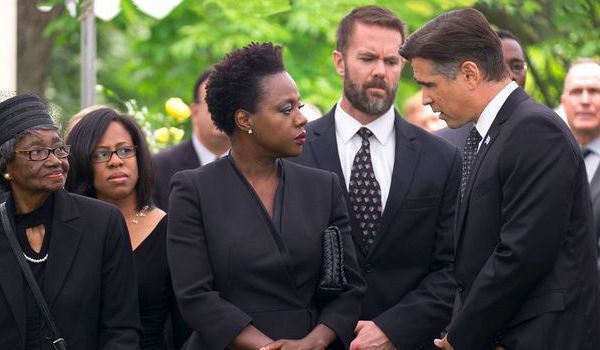 Director Steve McQueen talks of his passion for this movie and it shows.  Widows gives you action at the beginning and end, and complex characters and wonderful dialogue in the middle.  This is a movie to savor.  Wholly unprepared, these vulnerable women display their guile, their strength over and over, to go far beyond what they thought possible.  It is incorrect to imply that the powerful underestimated these women.  In reality, the powerful didn’t even see them.  This is not an Oceans 8 type buddy heist film, rather it is a do-or-die film.  Given that the theater directed us to its far reaches, I don’t expect many to find it.  Put this one on your list; it will make an enjoyable evening.  I give it 4.5 Gavels and it receives a 92% Rotten Tomatoes rating.

Harry Rawlings and his three buddies are killed in a robbery attempt.  They stole $2 million from other criminals, but it burned in an explosion.  The “boss” gives the women one month to pay it back or they will die.  He also happens to be running for the position of alderman for the city of Chicago against another nefarious character.  Both want the position for one reason–greed.  None of the widows are part of the original enterprise, none have any criminal skills.  But, they do have an intense desire to survive. 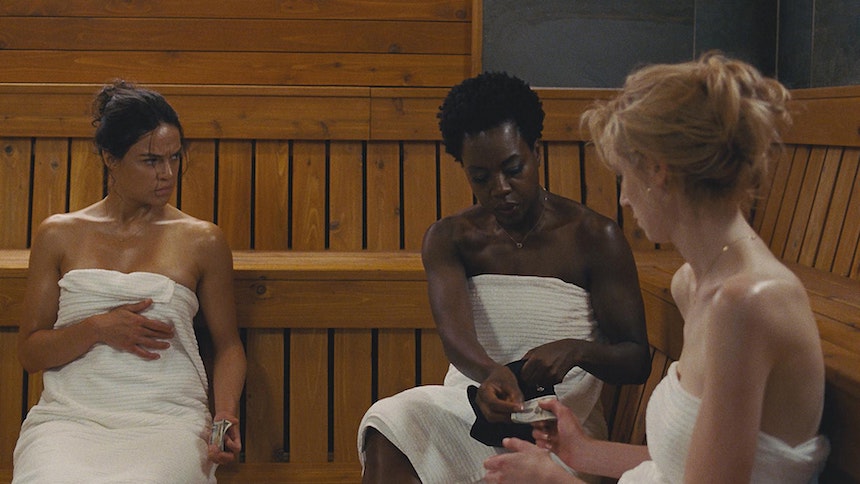 Viola Davis and Elizabeth Debicki are absolutely terrific in a one-two punch, literally. Davis is Rawlings’ widow, smart, spoiled and naive.  Debicki is an abused widow, with no money, forced into a situation she loathes.  These two are worthy of an encore.  Liam Neesom is Rawlings and a reminder that you can never trust a thief.  Colin Farrell as Mulligan and Bryan Henry as Manning brilliantly show the depth of corruption in Chicago politics.  Daniel Kaluuya is particularly vicious as Manning’s brother and enforcer. The only misstep in casting is Robert Duvall as Mulligan’s father and political mentor.  He is just too much of a caricature.

The juxtaposition of Davis and Dubicki is genius.  They play off one another so well.  At times, McQueen reaches too far in touching social issues which do nothing to advance the plot, but such is the tenor of the day.  Yet, when he stays with the central premise, the struggle to live another day by any means possible, the movie is worthy of an Oscar nomination.   The motives of each character, so obvious, and yet so intriguing.  This is that rare movie where you can realistically hope that the widows get away with their “crimes.”  Apparently, Widows was an ITV series in 1983.  If we are lucky, maybe we will see more of these ladies.