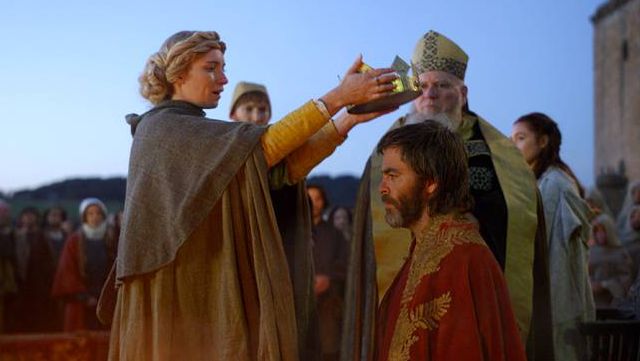 Why?  Time Magazine has the True Story Behind The Outlaw King and even Wikipedia feels the need to list the many historical inaccuracies behind this movie.  It is understandable that the director needs to compress events;  it is not understandable why you need to alter events.  That said, this is still one heck of a story.  To be a hero to Scotland, you must kill off your competition, persuade the clergy to absolve that murder and crown you king, have your supporters reduced to 40, hide out and return with guerrilla tactics to take on the mighty English.  And, you think you need to embellish that?  How about if I add that 300 years later, his descendant James VI becomes King of England and Scotland?  Inaccuracies aside, Netflix makes an entertaining movie, worth your time.  I give it 3.5 Gavels and it receives a 57% Rotten Tomatoes rating.

In 1304, King Edward I puts down a rebellion in Scotland.  Robert the Bruce’s father declares fealty to Edward but dies shortly thereafter.  Besides levying taxes and requiring conscriptions, Edward kills William Wallace in the most gruesome manner.  (Remember the ending of Braveheart?)  Robert decides to correct his father’s mistake by joining forces with John Comyn, the other contender to the Scottish throne.  Comyn threatens to betray Bruce.  Thus begins the intrigue, double crosses, and daring of the Outlaw King. Chris Pine is Robert the Bruce, handsome as ever, but likely not nearly as brutal as the real thing.  Florence Pugh is his wife, Elizabeth.  Portrayed as very brave, she says “I choose you Robert.  I choose you.”  Watch for her in future movies as she won a Best Actress award in Lady Macbeth in 2016.  Aaron Taylor-Johnson is the most notable actor as Douglas.  Edward took lands from his family and he wants revenge.  Billy Howle as the Prince of Wales appears to be complete Hollywood fiction and wholly unnecessary.

With some nudity and gore, this is rated R for a reason.  The climatic battle scene (with spikes) goes on much longer than necessary.  Apparently, because of tepid reviews, fourteen minutes of the movie were cut.  Since they included scenes with William Wallace, such is a shame.  You will enjoy the Warwolf, the trebuchet.  The Prince of Wales raises the Flag of the Dragon; Robert responds by saying “now we fight like wolves.”  Both mean no more chivalry, although the depth of violence never seems too chivalrous.  Overall, this is a good medieval flick, although a long way from the quality of Braveheart , an Oscar winner for Best Picture.