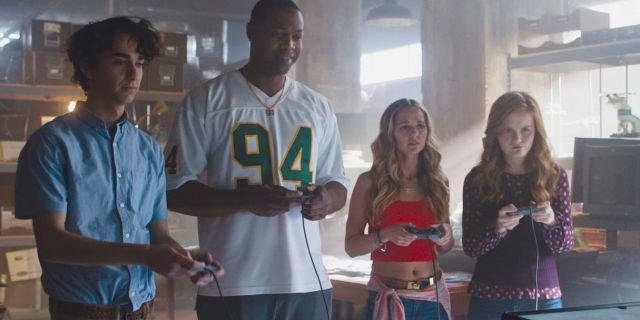 Hokey but entertaining,  Jumanji is definitely not the second worst movie of the year as claimed by a critic from New York.  While there is no nudity, it is absolutely PG-13 as there are lots of sexual references.  It may also have helped if you saw the original Jumanji as there are continual references to the 1996 film.  (Note:  I haven’t seen the original with Robin Williams and Kirsten Dunst.  I might now check it out.)  The movie is aimed at a younger, gamer generation and the audience reflected it.  Given the competition, this movie seems destined to get lost although there is a projected $45 million opening on a $100 million budget.

Four high school students, the dumb jock, the nerdy girl, the popular ditzy blonde, and the brainy shy kid are given detention.  They find a video game and are sucked into it as a mousy zoologist, a hot redhead judo artist, a heavyset cartographer and a smoldering hunk explorer, respectively.  In the jungle, they must recover the jewel taken by the evil Van Pelt before their three lives are exhausted.  Should they fail, they will never be able to return to their families.  Like video games, there are levels to pass and skills each possesses to assist them.

Dwayne “The Rock” Johnson as Dr. Smolder Bravestone is his usual smoldering self; he might be able to make this movie a commercial success.  Jack Black is Professor Oberon and has some funny moments as he transforms from a teen knockout to middle aged chubby guy.  Kevin Hart is Mouse Finbar, clearly underutilized here.  Karen Gillan is Ruby Roundhouse, also a knockout in more ways than one.  Bobby Cannavale is Van Pelt, more silly than evil, poorly cast.  Nick Jonas and Tim Matheson are also in the movie, but add little.

Nothing about this movie screams “you must leave your warm homes, pay $9.00, and spend two hours to see me!”  More likely it sighs  “if you have nothing better to do . . .”  Again, it’s not bad but there is so much better out there that I recommend you wait for Netflix .  Some hot cocoa, a wool blanket and, if you are not happy with your selection, a nap will soon follow.  Win, win.

1 thought on “Jumanji: Welcome To The Jungle — 3 Gavels 77% Rotten Tomatoes”