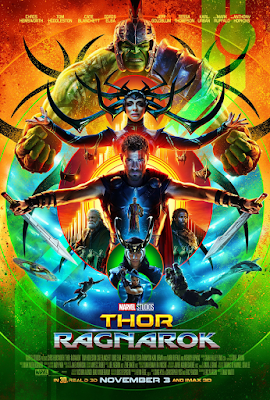 Hell hath no fury like a sister (Hela) scorned.  In this case, Hela is rejected and imprisoned by her father, Odin.  Cate Blanchett says “there is so much untapped potential villainy in women.” She returns to Asgard and wants Revenge with a capital R.  If you like this genre, you will love this movie.  Every good movie has a good story, but a very good movie has something else.  In this one, it is humor.  The characters make fun of themselves, and each other.  Best of all, you can tell they are enjoying themselves and it translates into their performances.

In very simplified terms, Ragnarok is part of Norse mythology for a great battle, death of important figures, natural disasters, then the end of the world. In the myth though, the world can come alive again.  As the movie opens, the fire demon Surtur tells Thor that Ragnarok has begun.  Soon Hela returns from captivity and causes Thor to be sent to Sakaar, a planet that enjoys Roman gladiator- type entertainment.  Unknown to Thor, the Hulk has been the champion of the arena for two years.  The Grandmaster will release Thor only if he can defeat his champion.  Thor agrees to the fight as it is his only way to get back to Asgard and save his planet from his evil sister.

Chris Hemsworth is terrific as Thor; his comedic timing and Tom Cruise-like smirks could hardly be better.  Tom Hiddleston as Loki suckers in Thor, and the audience, with his good brother-bad brother persona.  And Cate Blanchett is a “marvel” for the goddess of death sister.  For those who say there aren’t enough strong female characters, I give you Tessa Thompson as Scrapper 142, who takes the captured Thor to the Grandmaster, played deliciously by Jeff Golblum.  (It is hinted that her character may become Thor’s love interest.)  Don’t miss Karl Urban as Skurge, Mark Ruffalo as Hulk, Anthony Hopkins as Odin,  Benedict Cumberbatch as Doctor Strange, and cameos by Sam Neill, Luke Hemsworth, and Matt Damon.  The director does a wonderful job of getting all these characters in the story as you bounce from world to world.

From the great reviews to the full parking lot on a Thursday night, there is good reason to think this movie will hit over $100 million this weekend.  Zealous Marvel fans will likely see this movie more than once over the next couple of weeks; repeat business really inflates the box office.  Although there are some good movies out next week, I don’t see Murder on the Orient Express derailing Thor.
This is a good one that your “comic book” friends will be talking about. Don’t get left out of the conversation!  Hire a babysitter, you won’t regret it.