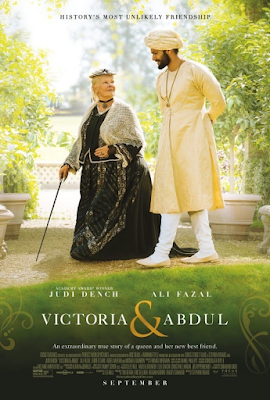 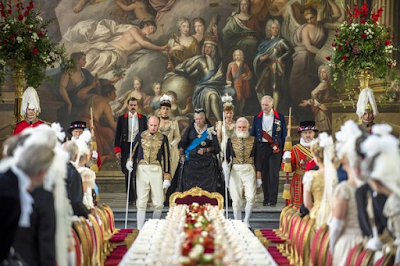 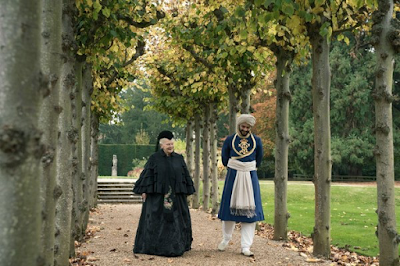 One immediately gets the impression that a movie is not going to take itself too seriously when it starts out “This movie is based upon a true story . . . mostly.”  To its credit, the movie was quite funny for the first hour as it spoofed the pomp and circumstance of the Royal household in 1887.  Later, as Abdul ingratiated himself into the Queen’s heart, to the consternation of the staff, the movie becomes decidedly a drama.  Reading History vs Hollywood: Victoria and Abdul, I am not certain that “mostly” applies here, but it was still a good story.

In 1887, Victoria was about to celebrate her Golden Jubilee and someone from India was needed to present her a gift, after all, she was Empress of India.  Abdul was chosen because he was tall, and presumably, spoke some English.  Living in the shadow Taj Mahal all his life, life in England was a shock to Abdul.  Nevertheless, he considered an honor to serve his Queen.  Victoria noticed he was quite handsome, asked that he serve her directly, and soon Abdul was her Munshi (native language teacher).  As the two grew closer together, even the Prime Minister expressed his displeasure.

Judi Dench is one of the great actresses of our time.  Her range from elderly death-bed Victoria to giddy, school-girl in love Victoria was worth the price of admission. Ali Fazal is satisfactory as Abdul but he is completely upstaged by Adeel Aktar who plays another Hindu forced to attend to the Queen.
Eddie Izzard is Victoria’s son, Albert. Tim Pigott-Smith and Olivia Williams, as close advisors to the Queen, were excellent.

While experts agree that Victoria was not the civil rights pioneer portrayed here, it is clear that a special relationship existed.  It is also clear that Albert was so embarrassed he did all he could to hide the relationship from history.  What was it about Abdul that attracted the most powerful woman of her time?  Was he a con man?  Was she lonely?  As Abdul is investigated, he has some surprises.  On a rainy day in Mariemont, the theater was full, although the average age was well over 60!  I am not a fan of re-writing history but overall, it was a worthwhile trip.