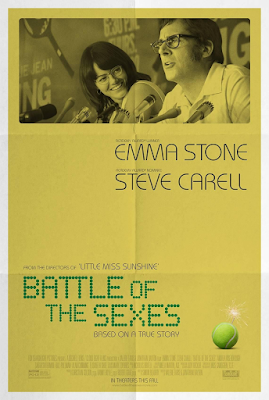 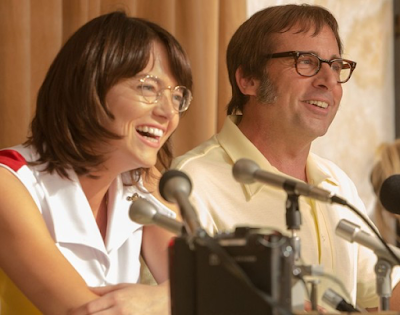 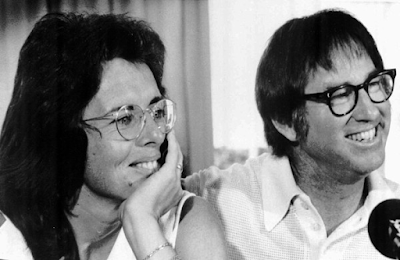 The title of Battle of the Sexes is deceiving; it should be entitled The Battle of Sexuality.  Billie Jean King is battling for equal rights (or at least equal pay), she is battling for respect, but most of all she is battling herself.  And, in my opinion, this movie fails to achieve its full potential.  As The Battle of the Sexes, this should have been a fun movie.  Everyone knew that Riggs was a huckster, that he was merely putting on a show so he could be that aging athlete, once again in the limelight.  While that is touched upon, it is not the main focus.  The focus is Billie Jean, married, struggling with how her relationship with her hairdresser (Marilyn) will affect her family, her career, and her life.  That could have been a fine movie, but the movie makes it appear that Marilyn touched her hair and, suddenly, Billie Jean realized she was a lesbian.  The lack of any backstory on her disenchantment with her life makes this immediate change seem unrealistic.

In 1972, Billie Jean King was on top of the “female” tennis world.  When the USLTA decided to pay women one-eighth of what men were making, she helped form the WTA.  (Note that their initial sponsor was Virginia Slims cigarettes;  where was Proctor and Gamble?)  On the other hand, Bobby Riggs was extremely unhappy as he was being “supported” by his wife’s money.  Ever the promoter, Bobby sets up a match with then Number One Margaret Court for $35,000 and crushes her.  That leads to a $100,00 Match of the Century on ABC with commentary by Howard Cosell.  While all this is going on, Billie Jean meets Marilyn, her husband finds out, and the distractions and pressure take their toll.

Reportedly, the real Billie Jean King told Emma Stone that she wanted this film to lead to an Oscar for the actress.  While Emma is good, she is not as good as she was in La La Land.  Steve Carell, as Bobby Riggs, is interesting in that he is almost a supporting character for the first hour and 15 minutes of the movie.  As the movie is focusing on Billie Jean, there is only one short phone call between them during that time.  Neither seem to have played much tennis before this movie but that criticism could be leveled in most sports movies.  Andrea Riseborough is Marilyn but her character is not developed at all.  Sarah Silverman as Gladys, sort of the guru for the WTA, has the best part in the movie. Alan Cumming, as the gay fashion designer, is always a treat to watch.  Bill Pullman is Jack Kramer, a legend in the tennis world, who is legendary here for being a complete idiot.

Why did the previews lead us to believe this movie was going to focus on the match rather than Billie Jean’s sexuality?  Did the producers think moviegoers would stay away?  Projected to make only $6 million this weekend, is the topic too dated for millennials?  It is noteworthy that the movie is only being shown on one screen in one small theater at the far end of the building.  This theater will not survive on money from this flick.  Having enjoyed watching this spectacle on TV in the ’70’s, this film just doesn’t do justice to the hype.  Go see American Made and wait for this one to come to your TV.