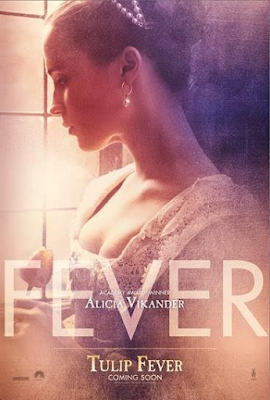 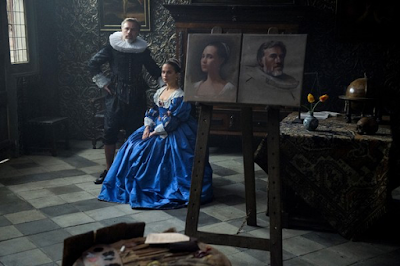 You know Hollywood has given up on a weekend when there is only one new movie released in all three major theater chains in this area; i.e., Regal, AMC, and Rave.  And, when that movie was made three years ago, and the studio hopes for a take of $1 million to $2 million, all is not likely to end well.  How does a movie that was originally planned for 2004 with Steven Spielberg as a producer and Jude Law and Keira Knightly starring end up not being made?  Apparently, the British government closed some tax loopholes and financing collapsed.  If you are going to risk money, by gosh, then you want to be able to write it off!  After seeing the movie, I think the 2004  investors should thank their politicians for saving them from themselves.

It is 17th century Amsterdam and Sophia is married to a much, much older Cornelis.  While he wants a child to preserve the family name and fortune, she does not tell him she is unable to have children.
For some inexplicable reason, except to show off to later generations that he has a young, beautiful wife, Cornelis decides to commission a portrait of the two.  Sophia falls in love with Jan, the artist, and they soon begin a mad, passionate, love affair.  At the same time, Maria, the maid, gets pregnant by William who smells like fish.  (I swear I am not making this up.)  To spirit her away, William tries to make money in the tulip market and gets kidnapped to Africa.  Sophia and Maria plot to make Cornelis think it is actually Sophia who is pregnant.  Then, Jan tries to make money in the tulip market so that he can spirit Sophia away and they can live happily ever after.  Since history tells us that the tulip bubble burst, one can surmise that all does not go well.

Alicia Vikander is Sophia and since this is billed as a “erotic thriller” (spoiler alert, it’s not), you get to see a lot of her.  Christopher Waltz is Cornelis but even he can not make his naive character believable.  Dane DeHaan as Jan is just a milquetoast.  Holliday Grainger is Maria and you may remember her from Showtime’s The Borgias.  Matthew Morrison (Glee), Cara Delevigne (Valerian with DeHaan) and Zach Galifinakis have small parts.  Judi Dench as the Abess is the only character that seems remotely interesting.  One doesn’t care about the rest of the lot, whether they prosper or suffer.

The director attempts to have the audience feel the “fever” of the times, but in doing so, the frenzy makes the plot hard to follow.  The various plot contrivances feel strained.  On the plus side, the costumes for the period are very good.  The director has also managed to make a beautiful canal in Amsterdam look crowded and absolutely filthy, for which I suppose he should be given some credit.
In any case, stay home and enjoy the weekend with family and friends.  This tulip didn’t bloom!