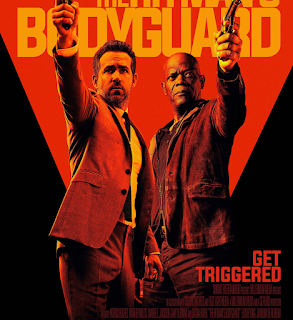 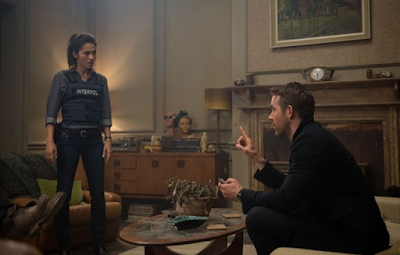 For the critics who say that Ryan Reynolds and Samuel L. Jackson have great chemistry, you betcha’.
For the critics who say this has been done before, what movie hasn’t been done before, in some fashion?  This movie is profane but will cause you to laugh out loud.  It reminds me of the Lethal Weapon movies except Ryan Reynolds is in the Danny Glover straight guy role, and Samuel L. Jackson is in the slightly crazy Mel Gibson role.  On a Friday evening, the theater was two-thirds full and a good time was had by all.

Michael Bryce is the bodyguard who was a AAA protection agent until a client got shot.  He blames his ex-girlfriend, Amelia, an Interpol agent, for disclosing the name of his client.  Years later, Amelia is trying to protect Darius Kincaid, an assassin who did work for a ruthless dictator, Dukhovich. Dukovich is on trial before a criminal court in Amsterdam and would prefer that Kincaid be killed rather than testify.  Kincaid has an extra incentive to testify as the authorities have agreed to release his wife, Sonia, from prison in exchange for his testimony.  When a mole causes the Interpol caravan to be attacked, Amelia must call Bryce to help protect Kincaid.

Bryce, played by Ryan Reynolds, and Kincaid played by Samuel L. Jackson, are well known commodities and the script allows them to be their smart aleck selves.  Even though they initially hate each other, this becomes a buddy movie as Jackson gives “love” advice to Reynolds.   Gary Oldman is Dukovich and he’s played this role many times before.  He doesn’t disappoint.  Elodie Yung (Amelia) is fresh off her role in Gods of Egypt; here, she is the love interest for Michael.  Salma Hayek as Sonia, is the biggest surprise as the loud and outrageous equal to Kincaid.

Having been to Amsterdam, I knew the narrow streets and canals would make a great location for chase scenes.  These were top notch, although admittedly, a chase scene is a chase scene.  And yes, Kincaid is an assassin, and Dukovich is ruthless so the body count is high, but not John Wick high!
No cute kid here, but some very familiar music appears to complement some of the memorable scenes. (Yes, that’s been done before, too.)  This is just a fun, eat your popcorn, don’t have to think too hard movie, and made for an enjoyable evening.  Interestingly, I think this movie may do better on Netflix than on the big screen.  It is only projected to make $18 million this weekend but most homebodies will want to give Ryan and Samuel a peek, or two.