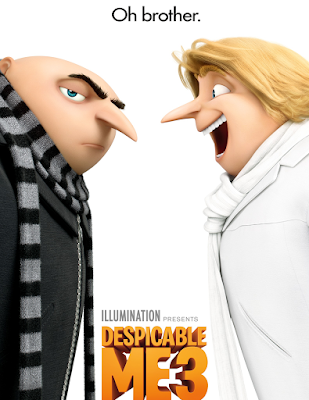 It’s hard to find much fault with a movie that’s just good, stupid fun but if I have one complaint, it is that the Minions were underutilized.  Of course, it is partially their own fault.  They go on strike because Gru has given up his life of villainy.  How could the writers do that to the Minions?

Gru is now married to Lucy and they have three adopted, and very cute, daughters.  Both are now agents for AVL (Anti-Villain League) and are very happy in their crime-free life.  But, after failing to apprehend super-villain Balthazar Bratt (previously child star Evil Bratt), they are fired.  While bemoaning his fate, Gru learns that he has a twin brother, Dru.  Dru has been a failure as a villain and wants Gru to teach him the tricks of the trade.  Gru is sorely tempted but must make sure that Lucy is kept in the dark.

Of course, Steve Carrell is back as the gravelly voice of Gru and Dru.  Kristen Wiig is the sweet, but don’t mess with her kids, Lucy.  Trey Parker as Bratt steals the movie with his antics.  The dance fight between Gru and Bratt is a gem.  Julie Andrews (remember her?) is the voice of Gru and Dru’s mother.  The Minions have a great scene when they become contestants in a singing competition.

If you’ve noticed I mentioned singing and dancing in DM3, you are observant.  While the music is not as good as in Baby Driver, I was impressed with the mix of tunes here.  The writers have done a good job incorporating the girls into the movie, and making Gru a father figure to them, as well as the Minions.  As you will find out, the plot becomes a little “sticky,” but as a spoof, I think it works.  It is hard to maintain a franchise like this, but kids, and most adults will like it.  They have earned a GO for DM4.