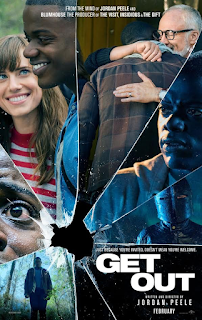 On 12/31/16, I reported that I do not watch, nor review, horror movies.  The release date of this movie was 2/24/17 so I ignored this movie for 3 months.  But the buzz, the ratings, and the suggestion that this movie is Oscar worthy, was too much to resist.  So I have partially violated Rule No. 1 by paying $3.00 to see this at the Dollar Saver.  However, I agree with the critics of the Rotten Tomatoes rating system that persons who do not like this genre should not rate it.  So, while I will not rate it, I am not bashful by saying I did not like it.

Armond White of The National Review bests describes this movie as a “black photographer travels with his white girlfriend to her family’s exurban home and discovers a racist cult intent on siphoning black men’s mental and physical energy.  Guess Who’s Coming to Dinner meets Rosemary’s Baby meets Meet the Fockers.”  This is one weird concept and I can not improve on that quote.

This movie had a budget of $4.5 million and has made $241 million (and my $3.00) so far.  The User Score of Rotten Tomatoes is 88%, so perhaps I am way off base.  In my defense, listening to every white person say, or do, racially insensitive things to a black man is not “race-savvy satire,” it is merely cringe-worthy.  And, I found the horror part to be just weird.

Daniel Kaluuya (Sicario), Allison Williams (recently of Peter Pan Live on NBC and daughter of former anchor on NBC News Brian Williams),  Bradley Whitford (West Wing), and Catherine Keener star in the movie, but Lil Rey Howery is the best part as the comedy in this comedy-horror styled movie.

This movie will likely be out on Netflix, or the like, within the next couple of months.  You will be tempted.  You have been given fair warning as to its content.  One critic predicted this will be a “future classic.”  I can not recommend it.