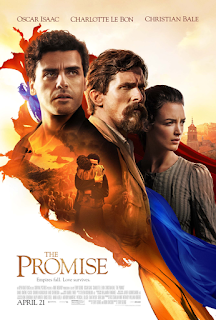 “The Turks are systematically rounding up Armenians and exterminating them” says American ambassador Morgenthau to the Turkish consul at the beginning of World War I.  Thus began the extermination of 1.5 million Armenians.  The Turks set up concentration camps years before the Nazis.  History vs Hollywood says the historical portrayals in this movie are largely accurate and that there was an attempt by the Turkish interests to see that the movie was neither made, distributed, nor seen.

Of course the downside of any epic saga is that the filmmakers believe that we must have a fictional romance with our historical accuracy.  Mikael is an Armenian who wants to go to Constantinople to become a doctor but lacks the funds.  He is “promised ” to Maral in exchange for a dowry that he uses for his medical studies.  In the big city, he meets and falls in love with fellow Armenian Ana.  The third leg of the triangle is her boyfriend American reporter Chris.  The Armenians are seen “as a tumor that must be eliminated,” and soon the three are caught up in the deportations.

Oscar Isaac as Mikael,  Charlotte Le Bon (The Hundred Foot Journey) as Ana, and Christian Bale are all first rate.  Shohreh Aghdashloo (House of Sand and Fog) and James Cromwell are always pleasantly welcome, this time as Mikael’s mother and Ambassador Morganthau, respectively.  The movie is at least 15 minutes too long as the director drags out the romance.

All in all, if you like history mixed with romance, you will love this movie.  For me, this was an under-reported (or maybe under-studied) area of history with lots of parallels to what happened 20 years later.  I would have preferred more history and less fake characters, but I still enjoyed this movie very much.  Give it a go!