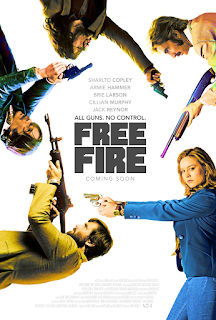 Beware the movie that promises “a spectacular parody – and biting critique – of the insanity of gun violence.”  When an old John Denver Sing is the highlight of the movie, you know something has gone terribly wrong. This movie is 90 minutes of shear boredom dressed up as art. It is so bad I created 0 Gavels to signify that it not only should not have been made, it should not have been conceived.  (I’m sure there are too many nots in that sentence but I am wound up!)  Warning– if you waste your money on this movie, you are going to feel real bad.

The plot, such as it is, is about an arms deal gone bad. One of the bad guys seriously hurt the niece of another bad guy the night before. Revenge must be had, and the next very slow 90 minutes is a shootout. Since they are all bad guys and there is no character development, you really don’t care who lives or dies.  The movie is so bad that most seem to die, then miraculously come to life, to shoot and be shot, again and again.  Presumably they saved lots of money on production costs since the movie never moved from an old, dirty warehouse.

Brie Larson, Armie Hammer, Cillian Murphy and the rest are all wasted here.  The script requires them to be shot and then crawl in the dirt for, you guessed it, 90 minutes. The filming is so bad that, much of the time, you can’t tell who’s who anyway. Yes, there are some absurd actions and funny quips, but not near enough to carry this flick.

For those who say I missed the point of the parody, I respond by saying that if this is a parody, it gives parody a bad name.  It is just a bad movie that someone tries to pass off as parody so they can call it art.  We are not lemmings!  Free Fire is not fun; it is not interesting. And the final dagger is that you just won’t care.