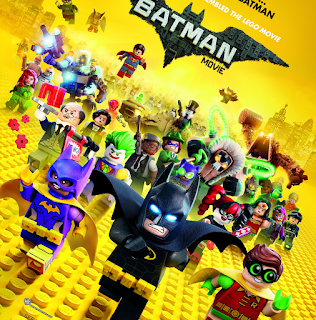 Warped. Wacky. Wonderful. Words to describe The Lego Batman Movie. Warped?  That describes the minds of the writers of this movie, and I mean that in a good way.  And, it all happens in warp speed. Wacky?  The writers spoof everything and I mean everything. Wonderful?  This movie is not for everyone but it is crazy fun.

Lego Batman imagines that The Joker and his criminal buddies decide to turn themselves into law enforcement and then Batman would have nothing to do.  Of course, Batman and the new Commissioner, Barbara Gordon (voiced deliciously by Rosario Dawson), suspect that The Joker is up to no good and continue to investigate.  Along the way, we are re-introduced to Robin and Alfred Pennyworth, who also become major characters in the fight to preserve Gotham City.

A movie entitled Lego has to be for kids and this is no different.  However, no child could process more than about 10% of all the characters and comments.  It all comes at you so fast that I am not sure that I processed more than about 40%.  And, like all very good kid movies, this movie has so much for adults that you will likely enjoy it as much, or more, than the kids.  And it has a moral to the story.  While some may be put off by the “It takes a village” repeat references, it was done within the context of Batman’s background.

So what will you spend your money on this weekend?  Fifty Shades?  John Wick?  Or Lego Batman?
Those millions who purchased the Fifty Shades trilogy will likely have a head start on the other two although all are sequels of a sort.  I have not seen Fifty Shades Darker yet but do not expect it to be much different than the original.  I strongly recommend Lego Batman, especially if you like warped and wacky!