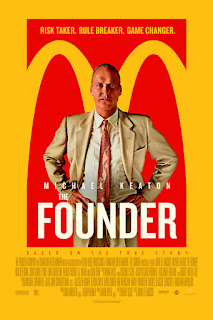 In sports, one often sees a once successful coach have mediocre seasons, then return to the top of his profession.  What happened?  Did he forget how to coach?  Unlikely.  The same may be said of Michael Keaton.  He was a hot commodity as Beetlejuice and Batman in the late 80’s and early 90’s. Then he dropped off the map until recently in Birdman (which I hated) and Spotlight (which I loved).
Did he forget how to act? Did he make poor movie role choices?  Was he a problem actor?  Who
knows?  But he is clearly at the top of his game in The Founder.

BASF is a German chemical company that advertises “We don’t make a lot of the products you buy. We make a lot of the products you buy better.”  This describes Ray Kroc.  He didn’t found McDonalds, he didn’t invent their processes, he didn’t even have the idea to become a real estate magnate, but he did know good ideas when he saw them and utilized them to become a billionaire. Ray Kroc would not be the only one to steal others’ ideas, e.g., see Steve Jobs.

Most of you probably don’t know that, for years, the legal profession has been using the movie My Cousin Vinny to teach ethics.  There is a very good chance that business schools will use The Founder in much the same way.  Ray Kroc was a successful businessman, but not a model to be emulated ethically.  And Michael Keaton portrays him perfectly.

Nick Offerman and John Carroll Lynch as the McDonald brothers provide a fascinating glimpse into the very beginnings of the franchise, their successes and their failures.  Remember Linda Cardellini from ER?  Where has she been? She is wonderful in a small role as Joan Smith Kroc.

I am always skeptical when a movie is advertised as the Best Movie of the Year and it is only the third week of January.  That seems like NBC advertising their TV show as the best new drama on Tuesday nights when, in fact, it is the only new drama on Tuesday nights.  In this case, you will enjoy this movie.  Drive-ins were a piece of Americana in the 1950’s and this accurately describes why fast food became so popular so fast.  While a McDonalds today is not unique, its story is.  And Michael Keaton clearly enjoys telling it.