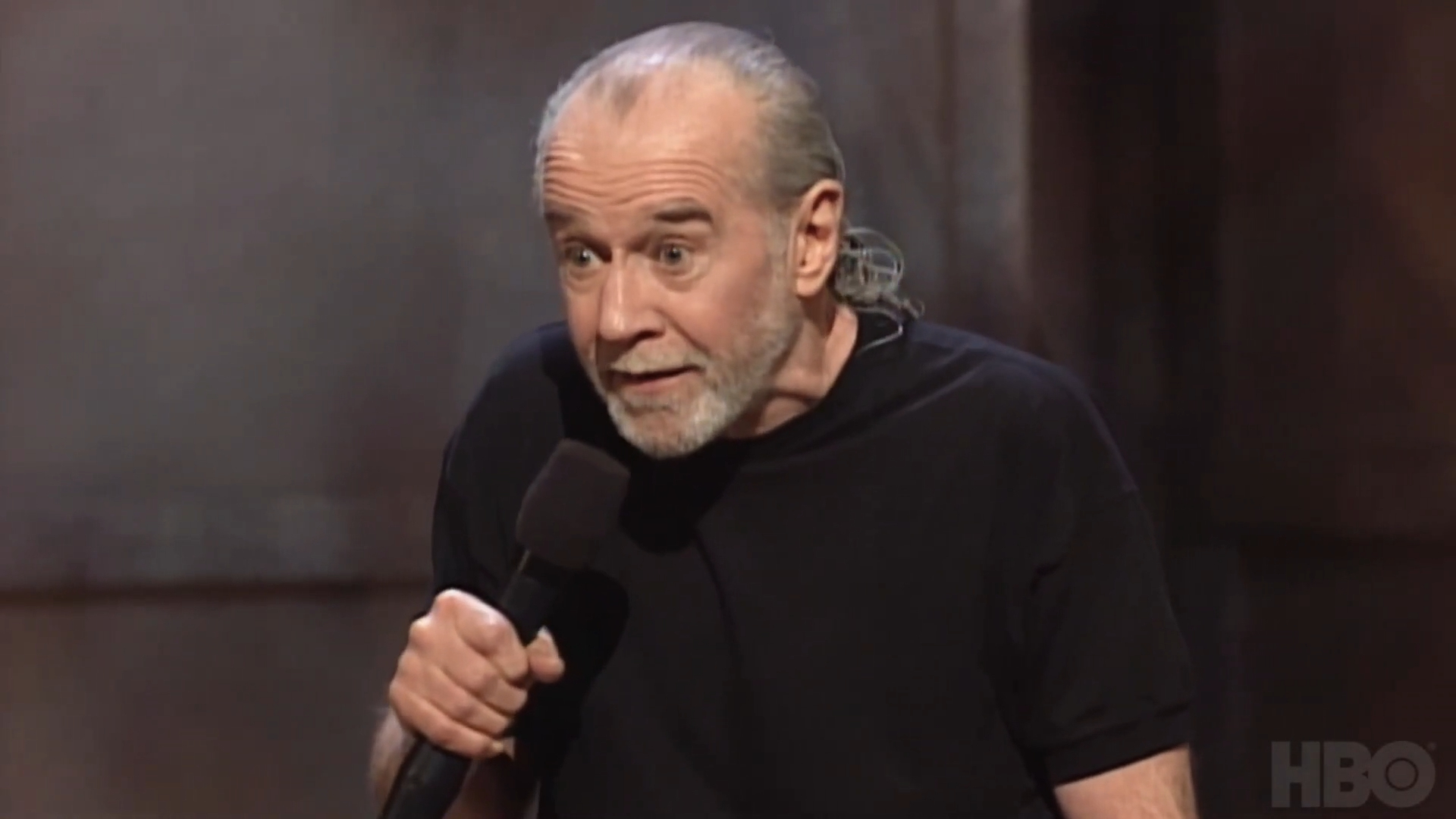 Dead some fourteen years, he comes alive again in an HBO documentary George Carlin’s American Dream. Before you get too nostalgic about the hippy-dippy weatherman, I need to remind you that he is also the creator of “the seven dirty words” you can’t say on public airwaves. George Carlin didn’t believe in censorship so, of course, the viewer hears those words, early and often. Still, was he the funniest and most thoughtful comedian alive? On October 11, 1975, he was the very first guest host of Saturday Night Live. Was the “king of counterculture comedians” a nihilist?

Brought to you over four hours in two episodes, George Carlin gets his start in Texas influenced by Lenny Bruce, moves to California with partner Jack Burns, and then meets a young girl in a nearby Dayton, Ohio nightclub. The boy from “white Harlem” who wants to emulate Danny Kaye falls in love with Brenda Hosbrook. Together with daughter, Kelly, theirs is a nomadic and poorly-compensated life until 1966 and John Davidson’s Kraft Summer Music hall. Al Sleet comes to life. He’s making $250,000 per year, but he no longer wants to be the “clean” comedian doing variety shows. If you want to change your image and be more “hip,” you gotta’ let your hair grow and go to college campuses. The first metamorphosis is about to take place. I give George Carlin’s American Dream 4.0 Gavels and it receives a 100% Rotten Tomatoes rating with an 8.4/10 IMDb score.

Never one to overlook the hypocrisies in our culture, George notices that there are seven words you can’t say on TV, but the FCC won’t tell you what they are. Now, as the “counterculture” guy, Carlin zooms to superstardom. Fame comes at a cost as Brenda hits the bottle and George regresses from marijuana to cocaine. Comedy being cyclical in nature, his career plummeting again, he begs Tony Orlando for a job. The 70’s are over; is George Carlin finished? Listening to Sam Kinison, George is determined to re-invent himself once again. HBO specials may be just the right venue.

Featuring archival footage and many hand-written notes of George Carlin, the documentary doesn’t lack for material, both good and bad. His mother told him “insist on being yourself always, in all ways.” Carlin wants “to let them know I’m thinking,” not necessarily getting others to think. Jerry Seinfeld believes that “comedy doesn’t change opinions.” Is being a stand-up comedian a vulgar art? Others offering opinions include Steve Martin, Patton Oswalt, Chevy Chase, and Chris Rock.

For those easily offended, George Carlin’s American Dream is not for you. He skewers nearly everyone from governments to religions, and not real crazy about the human race, either. Described as having “great empathy but a great mistrust of institutions,” George exaggerates to great effect. For those, like me, who did not subscribe to HBO, the later specials can be dark as well as biting. Is he bitter or is this his way of expressing a funny kind of optimism?

“It paints a vivid, deeply insightful picture of someone who was less a nihilist than perpetually disappointed and heartbroken over the state of the world, and the country he loved.” The Spool

“A celebration of an incredibly smart, undeniably funny man who had an amazing way with words—and a beautiful, lifelong disdain for any powerful institution or individual that oppressed and exploited others.” Chicago Sun-Times

What would George Carlin think of events in 2022? He would still be wary and critical of the far right, the far left, and not too happy with those in the middle. It’s an interesting retrospective.