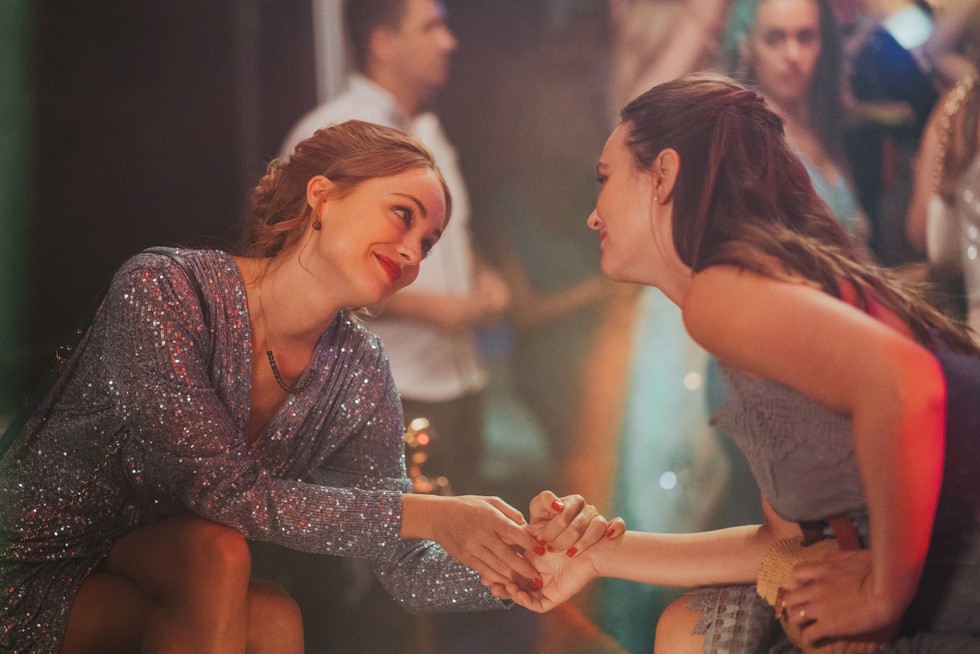 For those of you unable to complete your vacation plans to Croatia, The Weekend Away will give your a taste. Then again, with this film, it might be a drunken hangover taste. Filmed mostly in Split, but also in Dubrovnik and Zagreb, the viewer gets a feel for why this is still one of my very favorite vacation memories. For Beth, it’s a different story. Unsettled in her marriage, still nursing a newborn, she flies to Croatia from London for The Weekend Away with her best friend. Kate’s marriage just ended in a bitter divorce and Beth feels guilty for not being a better friend through her tough times. Kate is ready to let the good times roll, not exactly what more inhibited Beth has in mind.

Apparently, The Weekend Away is also a best-selling book. Leave it to Netflix to turn it into a mediocre movie. I think they have a whole department that excels in converting good books into must-not-see films. The opening shot is of a female floating on the water, face down, presumably dead. That is a “dead” giveaway that The Weekend Away is not going down on Beth’s all-time favorite list, but is the body Beth or Kate or someone else. Switch over and our two best friends soon giggle over alcohol, commiserate over their sex lives, and get ready for a night at the club. Tired, an evening with gigolos is not exactly what Beth contemplated. With too many predictable plot devices, I give the 90 minute flick 2.5 Gavels. It receives a 59% Rotten Tomatoes rating with a 5.6/10 IMDb score.

When Beth wakes up the morning after, Kate is nowhere to be found. Was Beth drugged? Did Beth have sex with Luka or Mateo? The creepy landlord is of no help, demanding she pay extra for party and the two extra overnight guests. The police will not file a missing persons report for 24 hours, certain that a drunken Kate will reappear. A Syrian taxi driver, Zain, will threaten the escorts for information on Kate’s whereabouts, but Beth must agree not to tell the police about his involvement. Out of nowhere, Beth’s husband, Rob, shows up suggesting that Zain may be the culprit. Escorts, crooked cops, jilted lovers, human traffickers, and jealous partners all are suspects.

In an art matches life scenario, Leighton Meester‘s second child was born September 2020. Then, it’s off to film The Weekend Away in the summer of 2021. Unlike Beth, she took her child with her to Croatia. Perhaps that’s why her performance seems distracted. Seen in The Girl Before, Luke Norris unconvincingly plays husband, Rob. No way those two ever got married. Ziad Bakri acts as Zain, a character more unlikely you’ll never meet. He has nothing to do but hang around waiting for Beth and be her knight in shining armor.

The Weekend Away appears to wrap up, but fifteen minutes of screen time remain, another “dead” giveaway. Hey, Bozos, you got the wrong guy! Most improbably, Beth is looking for a set of keys when she finds the penultimate clue, sort of a needle in a haystack discovery. I didn’t buy it.

“This is the kind of movie actresses make when they wish to prove they’re more than just a pretty face – or are desperate to be taken seriously. Meester wears no make-up, dresses frumpy, puts on a few pounds to play a post-partum mom, and goes method.” Epoch Times

“The plot works its way past red herrings and into anti-climaxes, never quite drowning in melodrama, but coming damned close, time and again.” Movie Nation

Watch The Weekend Away only for the scenery, and trust me, Croatia has even better sights than these.