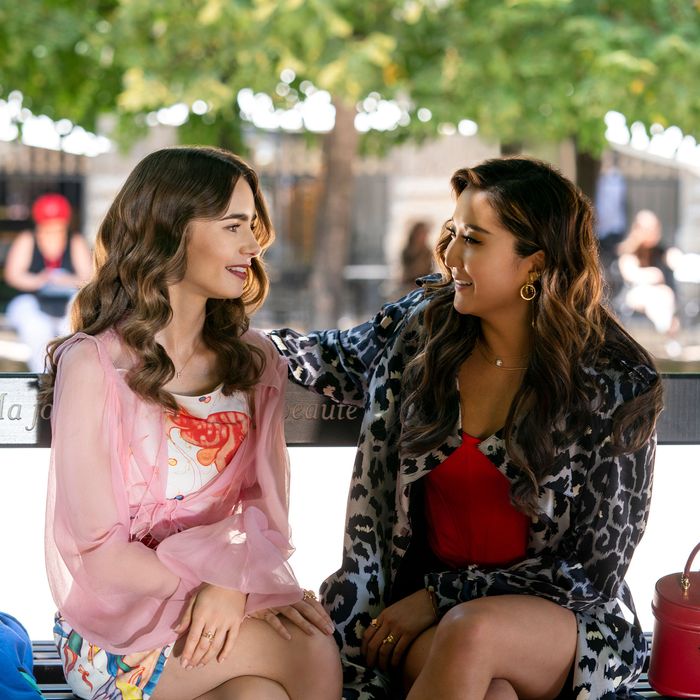 Emily in Paris 2 continues her year-long assignment. She’s torn between the French commandment “to live and love and make mistakes,” and her Chicago roots to “rip off the band-aid. You and I are a Paris fantasy.” That’s what happens when you fall in bed with your client’s boyfriend. Mistakes follow Emily at work. She sees herself as somewhat of a fixer. Yet, it seems her co-workers spend lots of time cleaning up after her. Products advertised this year include not only the Vespa, but also luggage, jewelry, and the lowly leek.

But, Emily in Paris 2 sells reverie, not products. Last season, best friend Mindy belted a couple of tunes. This year, she gets her own band. The producers realized they had to take advantage of that voice. And, girl, did they ever. Emily in Paris 2 gets 3.5 Gavels and it receives a 54% Rotten Tomatoes rating (only 13 reviews) and a more realistic 7.2/10 IMDb score.

Now sponsored by Antoine, Gabriel stays in Paris to open a new restaurant, Maison Lavaux. Camille senses that Gabriel’s affections are elsewhere, but doesn’t suspect her friend, Emily. Feeling tres guilty, Emily sets her sights on getting Gabriel and Camille back together again. Mindy sings for tips in a gay bar. A street band asks her to be their lead singer. In exchange for rent, Mindy and her band will provide music for the launch of a new product. Now, if Emily could only learn a little French. Will Alfie from London (where else?) be another distraction?

Lily Collins continues to shine as Emily, perky without being too silly. Philippine Leroy-Beaulieu softens a bit as boss, Sylvie, but still reminds that the French can look down on us mere mortals. Still, I can’t wait until Ashley Park gets another chance to display her Broadway-quality voice. Mindy Chen is a character with lots of layers and we are just beginning to get a peek. More Mindy, please!

Of all the excesses in Emily in Paris 2, none tops the flying sax over a pool in St. Tropez. Don’t miss it! For those not fortunate to be retired, you might appreciate the French attitude towards not working on weekends. And, for the romantics among you, the French words for a lightning strike are the same as love at first sight.

“Emily in Paris serves up more of the same, and more of something TV can do well: Charming, watchable, low-friction entertainment in a setting that’s fun to look at. It’s not the best of anything. But it’s good TV.” Variety

“It’s not high art. This is not a show that will change the world or reveal deeper truths about humanity. But it’s awfully pleasurable, like a well-crafted pop song.” IndieWire

“Fun” and “pleasurable,” is code for don’t expect any Emmy nominations. Still, I’d be surprised if we don’t get a Season 3.