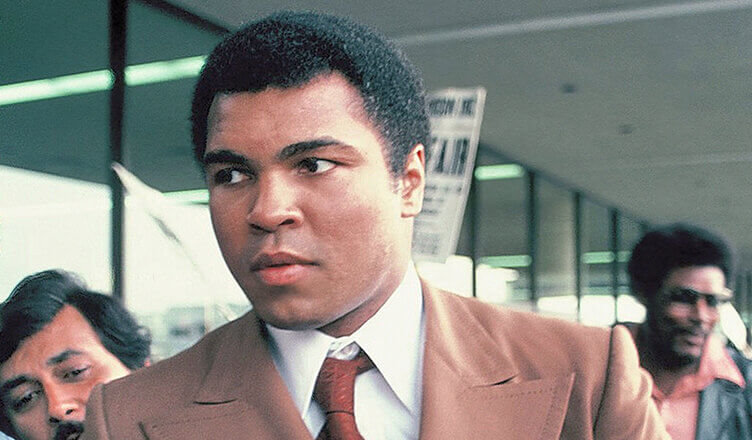 Almost universally beloved later in life, Ken Burns pulls no punches as he points out that Muhammad Ali was initially a divisive figure. No coach wants to give his opponent “bulletin board material,” yet young Cassius Clay was a trash talker extraordinaire. At times, some of his barbs could only be described as cruel. In an era when Martin Luther King urged integration, Clay gravitated to the teachings of Malcolm X, Elijah Muhammad, and The Nation of Islam. They were separatists. In June of 1965, Muhammad Ali filed for annulment from Sonji Roi because she would not convert to Islam. “Next time I’m going to find a girl 18 or 19 and raise her to my way of thinking.” Imagine saying that now.

Currently airing on PBS, this four-part, eight-hour documentary takes the viewer from birth to death. How did he get his start? His bike stolen, he threatens to beat up whoever took it? Officer Joe Martin asks “do you know how to fight?” Running five miles alongside his school bus in training, Cassius win the Golden Gloves championship at age 17 to qualify for the Olympic trials. But, how do you get to the Los Angeles trials, let alone the Rome Olympics, if you are afraid to fly? Who would guess that an 18 year old from Louisville would become the Mayor of the Olympic Village, then win gold in the light heavyweight division? The Greatest just found his world stage and he’s not about to let it go. I give Muhammad Ali 4.0 Gavels and it receives early 100% Rotten Tomatoes ratings with 9.1/10 IMDB score.

In the early ’60’s, organized crime controls boxing. “To save Clay from the hoods and jackals,” William Faversham puts together a syndicate to pay Clay a bonus, salary, and expenses. He’s sent to Miami to train under Angelo Dundee. In 1961, Clay notes the braggadocio of Gorgeous George, the wrestler. Why not hype the gate? A heavyweight championship fight with Sonny Liston looms on the horizon. Unimpressed by the 22 year old, Liston says “I’ll get locked up for murder if I fight him. He should be arrested for impersonating a fighter.” The experts agree with Liston.

The viewer gets mostly black and white archive film in the first two parts of Muhammad Ali. Besides the mob influence, Clay battles legislative efforts to ban boxing as too barbaric. Burns suggests that Clay stymies a New York bill by promising to sell out Madison Square Garden in his next fight. Clay wants to join the Nation of Islam but fears it will harm his chances for a championship fight. His parents are not happy with the influence of Elijah Muhammed and his son, Herbert. Unheard of at the time, Clay gets a $1 million guarantee as a challenger to Liston. Bigger paydays are on the horizon.

Muhammad means “worthy of all praise.” Ali means “most high.” When Elijah Muhammad bestows this name upon Cassius Clay, it spells the end of Malcolm X’s influence on Ali. Malcolm X shot by followers of the Nation of Islam, Muhammad Ali seems unmoved by the death of his friend. “If you oppose the messenger of God, then you will die.” Through all of this turmoil, no one has the speed and footwork of Muhammad Ali. He floats like a butterfly, stings like a bee. He is The Greatest!

“With a steady hand, the series details the ins and outs of Ali’s unparalleled boxing career, his significance as an unapologetic Black Muslim, and his singular place in history as a lightning rod who never shied away from the storm.” Variety

“Watch just a few minutes of it, pretty much at random, and that folk-hero description becomes inescapable. The man was that magical, that maddening, that incomparable.” Boston Globe

Boxing is a brutal sport; Ali grew up at a brutal time for a young black man. It’s notable that he becomes a worldwide symbol of peace and hope. Like most Ken Burns’ series, I’m sure you can easily find the first two episodes. This is one that you can pick up in the middle.