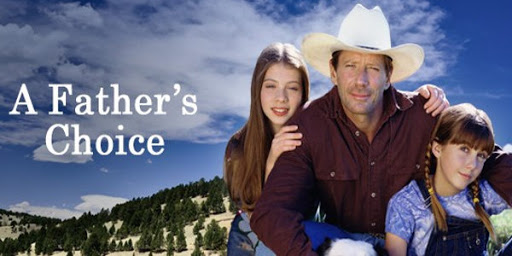 In the 1970’s and 1980’s, if you wanted to make a television mini-series, handsome, square-jawed Peter Strauss was your man. Today, those under 40 likely have no idea who this five-time Golden Globe nominee is. So, finding A Father’s Choice, shown on TV in 2000 and now on Amazon, is a nice reunion. When filmed in this movie, Michelle Trachtenberg was 13. By 2011, she was the cover girl for Maxim. As fame and fate are fickle, Mary McDonnell is more recently of mind because of her starring role in Closer and Major Crimes.

A Father’s Choice, “inspired by a true story,” features all three at different points in their career. Somewhat predictable, it is still a very nice story of a family torn apart by tragedy and rebuilt. I give A Father’s Choice 3.0 Gavels and it has a 6.1/10 IMDb rating with a 64% Audience score on Rotten Tomatoes.

Arriving home at night, Kelly and Chris witness the murder of their mother as they interrupt a burglary. Living in L.A., they have not seen their rodeo champion father in three years. Taken into temporary protective custody, the Court must choose between wealthy Aunt Gayle who lives in Chicago, and Mac who lives in a two room shack on a cattle ranch. Mac gets 90 days to prove he can be a father to the young girls.

Peter Strauss is a natural on a horse, and a natural at playing Mac as a cowboy out of his element. As the child protective service advocate, Mary McDonnell should have stepped aside when her feelings for Mac grew past professionalism. But, let’s not quibble except to say that her Susan Shaw needed more screen time. Interestingly, the murder investigation quickly becomes a side-note as the friction between Mac and Kelly ignites. Michelle Trachtenberg was a ten year veteran of TV and film by this time, and her Kelly brings out all your emotions.

Filmed in Alberta, Canada, the scenery, the cows, and the horses are a pleasant diversion from our stay-at-home orders. Taken hundreds of miles from home, away from friends, with no phone and no TV, Aunt Gayle and Chicago looks like a pretty good option. Always in the back of everyone’s mind is the thought that the murderers may decide to tie up loose ends. Will they try to kill the only witnesses? Given the age of the film, a cursory check yields no information as to the accuracy of A Father’s Choice. By the time Kelly tells the Judge that “he decided he loves us more than the rodeo,” you will be choosing between Kleenex and Puffs. Certainly, it’s not a great film, but it is a nice choice.