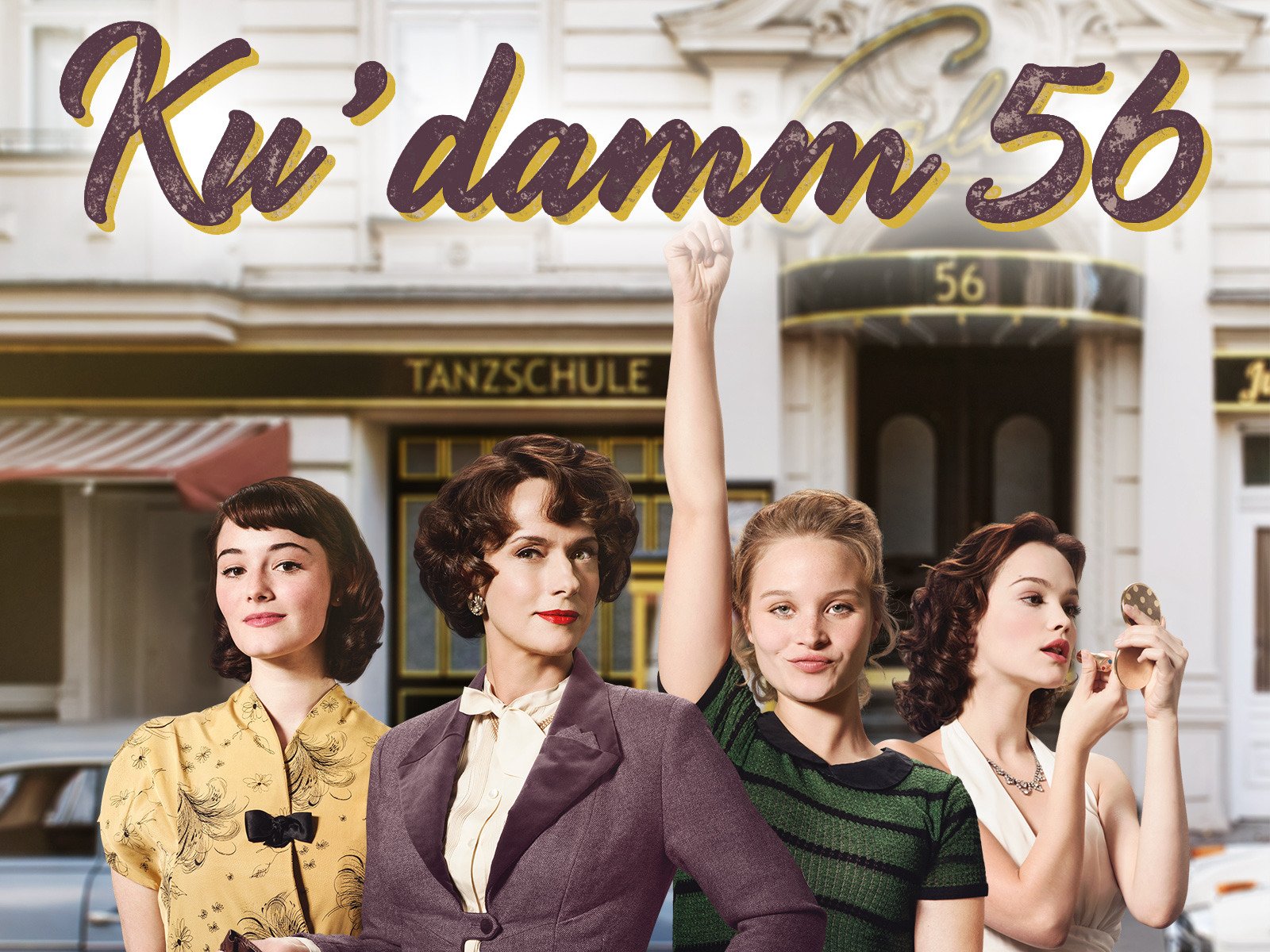 Reminiscent of The Restaurant, Masterpiece brings us Berlin Dance School aka Ku’damm 56 and Ku’damm 59. Season One set in 1956 and Season Two set in 1959, be prepared for subtitles except when singing American rock and roll. Caterina Schollock owns the prim and proper Galant Dance Studio. If you want your son or daughter to learn the waltz, the foxtrot, and proper manners, it is THE designated place to go. Caterina has three daughters of marriageable age. Still haunted by the remnants of WWII and rampant discrimination, her concerns are money and status, not happiness. At The Berlin Dance School, the new generation rebels.

West Germany banned the Communist Party in August 1956. Construction on the Berlin Wall starts August 13, 1961. Nazi sympathizers are still in the fabric of society. If a female wants to drive a car, rent a flat, or obtain employment, a call will be made to her husband. In the mind of Caterina Schollock, “the cha-cha, the rhumba, and rock and roll are just solicitations for sex.” Moreover, she thinks “education for women is like telescopes for moles.” A former European Dance Champion prior to the start of the war, her daughters are about to learn that she is not a “squeaky clean mother.”

I give Berlin Dance School 4.0 Gavels and it receives a very good 7.5/10 IMDB rating for Season One and an even better 7.8/10 for Season Two.

Eldest daughter Helga marries the man of her dreams, Wolfgang, soon to be a public prosecutor. Selected as “the ideal image of the German housewife,” she chafes under his control and their problems in the bedroom. Youngest daughter Eva is a nurse, urged to flirt with Professor Fassbender, a man old enough to be her father. She knows of his “experiments” at a concentration camp. Is she “looking for her father in him?” The black sheep of the family is Monika, so inept that she fails every course at Housekeeping School. Freddy introduces her to forbidden rock and roll American music. Rich and moody Joachim “roughly initiates” her into German sexist society. Guess which one her mother picks for her.

It’s doubtful you’ve run across Sonja Gerhardt before, but she is the star of Berlin Dance School as Monika. She blossoms from wallflower to dancer/singer/movie star, from pariah to the conscience of the family. A Russian born actress, Emilia Schule plays Eva, struggling to shape her own life within the strictures of German society. Finally, Maria Ehrich acts as Helga, sweet and innocent until anyone tries to interfere with her outwardly perfect life.

Early on, Berlin Dance School seemed destined for the scrap heap. No one could be nastier than Caterina telling Monika that “you will be the reason that one day I go to the attic and hang myself.” But the undertones of the backstories draw you in. Why did Caterina’s husband not return after the war? Just how close was Joachim’s father to the Nazi war machine? Is love possible across the West Berlin/East Berlin divide? Tongue-in-cheek, will rock and roll transform stodgy German males?

In 2016, The Hollywood Reporter refers to Berlin Dance School as “Germany’s answer to Mad Men.” Willow and Thatch describes Berlin Dance School as “a take on stuffy conventions and close-minded ideas about women held up by the generation from old Nazi Germany which butts up against those wanting to move into the future where women’s values, desires and rights are given more recognition.” This one borders on a soap opera, but the acting and writing prevent it from slipping into the mundane.