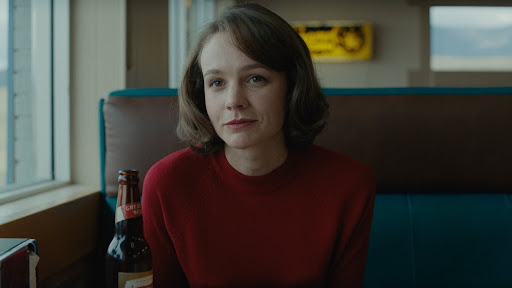 Do you remember the last time you were in such a good mood that you couldn’t wait until you saw a movie so sullen, so morose, that it would suck the life out of you? Me, neither. Wildlife is such a movie. Thirty minutes in, I begged it to put me out of my misery. First time director, Paul Dano, says he always wanted to make films about family. This was a poor family to choose.

Critics claim this is a breakout performance by Carey Mulligan. What? They’ve not seen An Education, nor Suffragette? Dano’s style is close-up after close-up, focusing over and over on the pain on the faces of this dysfunctional family. Rather than groundbreaking, I found it tedious. I give Wildlife 1.5 Gavels and it receives a 93% Rotten Tomatoes rating with a better than expected 73% Audience score.

In 1960 Montana, Jerry loses his job at the golf course forcing wife, Jeanette, and son, Joe, to get part-time jobs. Jeanette, unhappy with the move to Montana, finally lands a job as a swimming instructor at the local YMCA. There, she meets Warren, a much older auto dealer. With no experience, Jerry leaves the family for months to fight forest fires for $1.00/ hour. Joe suffers as he watches his mother grow closer to Warren for both economic and emotional support. Even worse is the fighting that occurs when Jerry returns.

All three main actors drag you into this pit of depression with them; they are that good. It’s not their fault this is just a terrible story of hopelessness. Carey Mulligan ( Jeannette), Jake Gyllenhaal (Jerry), and Ed Oxenbould (Joe) deserve medals for surviving this shoot.

With a cast of stars like Mulligan and Gyllenhaal, I wondered why this 2018 flick was on no one’s radar. It has no commercial value. A few weeks ago, a critic mentioned how wonderful it was to find a sleeper. Here, I found a snoozer.

The Seattle Times thinks it “a small-scale gem with a haunting final image, . . . the story of a 1960’s family quietly imploding.” On the other hand, The Chicago Reader writes “there’s no shaking the feeling that this sort of study of all-American repression has been done to death.” If you enjoy that “nostalgic” time when women were supposed to be housewives, Wildlife may be for you. As for me, I’ll pass.