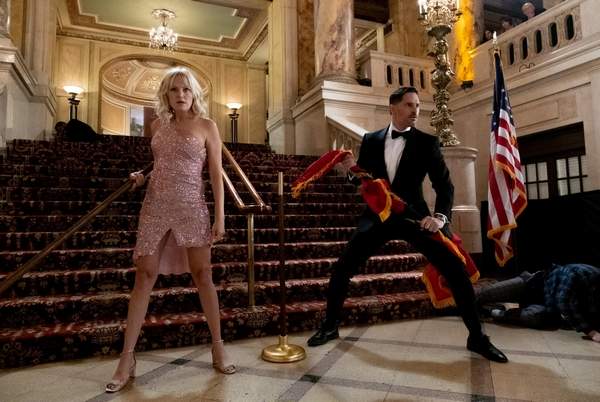 Unless you are in the fifth grade, sleep over past your alarm and skip The Sleepover. Seriously, if I had a time machine, I’d go back and re-live that wasted 100 minutes. There are some nice night scenes of Boston, but the rest can all be seen in the trailer, although that’s not saying much. Usually, the cute kids can save the film. Not so, in The Sleepover. Mostly, you will likely be happy they are someone else’s kids.

In Plain Sight is heads and shoulders above this film as a Witness Protection story, with better action and humor. Whatever was Netflix thinking? I’m absolutely shocked at the 67% Rotten Tomatoes rating as the 5.5/10 IMDb score is much closer to reality. The movie is as stupid as the final twist on the Pescatrici Syndicate. I give The Sleepover 2.0 Gavels.

Fifteen year old Clancy is a shy girl who loves the cello, and, secretly, Travis. Her parents, Margot and Ron, will not allow her a cell phone, afraid of social media influences. Margot refuses to allow Clancy to attend an unchaperoned party at Travis’ house. That night, younger brother, Kevin, and his friend, Lewis, are having a sleepover in the backyard. Just as Clancy and her friend, Mim, are about to sneak to the party, Lewis sees Margot and Ron “kidnapped by ninjas.” Soon, the family learns of Margot’s criminal past. Margot leaves clues for the kids to track her down, but will they be in time?

Kudos to the makeup artist for making Malin Ackerman look bored and less attractive than usual. As Margot, she did this one for the money. Ken Marino (Dog Days), as Ron, seems to keep busy with this same character, which is just sad. Of the kids, only Sadie Stanley (Clancy) makes a favorable impression.

Predictable schmaltz is the apt description for The Sleepover. After viewing this mishmash, one is concerned that Netflix will make a sequel. I wouldn’t wish that on my worst enemy. The Hollywood Reporter agrees bemoaning “the kind of vanilla, disposable product one imagines might’ve played on the Disney Channel around the turn of the century.” But, which century? Indiewire, also concerned about your nocturnal habits, notes “nothing about The Sleepover will surprise, and at its best, that’s a comfort; at its worst, it will put you right to sleep.” Note the picture below, everyone happily waving goodbye. Put me in that canvas as I am certainly happy to wave goodbye to The Sleepover.