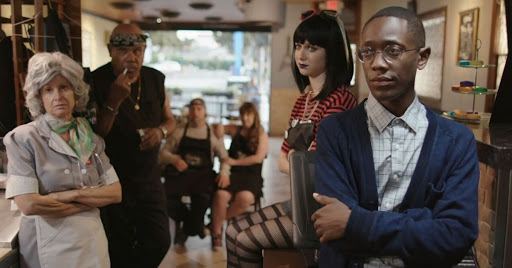 Are you the sort that gobbles down your food? If so, Turnover may not be for you. Like the cherry turnover made at the onset, this film is to savor. The owner of the Creperie Cafe tells us that “the turnover is the hardest recipe to master. The most important part is the flakiness of the dough.” Likewise, the most important part of Turnover is the flakiness of the characters. None are what they seem; first impressions will fool. Setting the table, the first hour of the movie is slow. So slow that I couldn’t comprehend the 100% Rotten Tomatoes rating and the 98% Audience score. But, as the ex-con cook, mouthy hostess, developmentally challenged buss-persons, long-unemployed waitress, and inexperienced manager take charge, this “family of misfits” serves up some great lessons. I give Turnover 3.5 Gavels.

Peter is suffering. Too much rich food, too many cigarettes, and a divorce cause him to neglect his Cafe. To keep his much-needed manager, Henry, he promises a franchise in Las Vegas. His soon-to-be ex undermines that plan while Peter is taking a doctor-ordered stress vacation. In retaliation, Henry hires the worst applicants he can find, gives each a one year contract, and quits to start a competitor restaurant. When Peter returns, he finds chaos and disarray. Maybe it is time to shut the doors and close the French cuisine cafe. Or, is there some hidden talent in this group that just might be tapped?

Off a fourteen year run as Captain Jim Brass on CSI: Crime Scene Investigation, it is about time that Paul Guilfoyle (Peter) got a starring role. From French chef to stroke victim to empathetic employer, he makes the most of it. Miguel, played by Charles Carrasco, appears the most unlikely cook ever. Like most tough guys, he has a heart of gold. The most striking change may be by Pepper, acted by Isabella Blake Thomas. Certain that her mother did not want her, this rebel finds a real home. Most of all, it is the Down syndrome couple of Gina (Jamie Brewer) and Charlie (Blair Williamson) that nearly steal the show.

Love is all around in Turnover. Peter caters the rehearsal dinner for the hearing-impaired daughter of a long time customer. Without giving away too much, a food fight enlivens the affair. Turnover doesn’t have quite the cooking scenes as does Chef or The Hundred Foot Journey, but enough to make your mouth water.

Film Threat says it best with “Turnover is an incredibly lite, feel-good drama…with emphasis on feel good. It seeks to find the best in all of us, while taking a group of people that society ignores and empowers them to become a team and succeed.” As The Creperie Cafe slowly morphs into The Eclectic Cafe, the menu mirrors the tastes of the staff. This indie, on Amazon Prime, is easy to swallow.