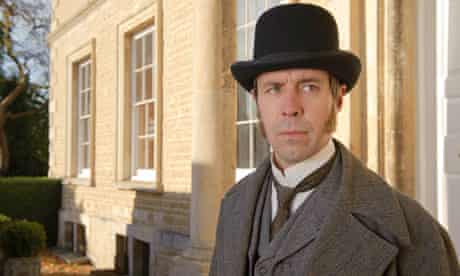 The Suspicions of Mr. Whicher are actually four suspicions filmed over four years. His first “suspicion” is based on a true story of the 1860 death of a three year old child and subtitled Murder at Road Hill House. Some believe there was a miscarriage of justice. Did they focus on the wrong person? Were others involved? The truth died with Constance Kent. In any case, the detective branch of Scotland Yard is in its infancy. One of the original eight detectives, Jack Whicher, is sent to investigate. Parliament demands a quick arrest (sound familiar?) as “no man, woman, nor child may rest easily in their bed” until the perpetrator is caught. For those interested the law, note the evolution of same over the last 160 years. I give The Suspicions of Mr. Whicher 3.5 Gavels and it receives a 6.7/10 IMDb rating.

Missing from his bed, Saville Kent is found stabbed in the privy. Sleeping in the same room as his nursemaid, she is the prime suspect according to Local Superintendent Foley. He is not all happy when Detective Inspector Whicher takes over the case. Scotland Yard believes the local cops to be “idiots,” and Whicher finds them obstructionists. Noting that a large amount of blood seems to be cleaned up, Whicher’s focus turns to a half-sister, Constance Kent, and her “lost” nightdress. Does she suffer from a mental infirmity? Could she have done this “despicable act” alone? Without a confession and/or the nightdress, has she committed the perfect crime?

“The best-kept secret in British movies” according to The Observer is Paddy Considine. As Jack Whicher, he is another of those tortured souls who cannot live without the truth. According to the film, this case nearly ended his career. Peter Capaldi is Samuel Kent. Many believe him to be the killer to cover up an affair with the nursemaid. The mercurial Constance Kent is played by Alexandra Roach (The Kid Who Would Be King). Whicher knows that he is being outsmarted by 16 year old Constance.

The Suspicions of Mr. Whicher is similar to a Sherlock Holmes mystery without the witticisms and gadgets. Constance is well-versed in the justice system at her young age. “She would rather hang than spend a lifetime in an asylum.” Not only was the public intrigued, notable writer Charles Dickens expressed his opinion on the identity of the killer. Of considerable post-sentence consternation, should a confession to a clergyman be subject to contempt for his refusal to testify? Once again, this case catches Parliament’s attention with the apparent consensus that, under then-current law, the pastor should be sanctioned. Constance Kent dies in Australia in 1944 at age 100. By now, you know she doesn’t hang. Still, a century and one-half later, the facts of the case, and her journey, captivate 21st century audiences.