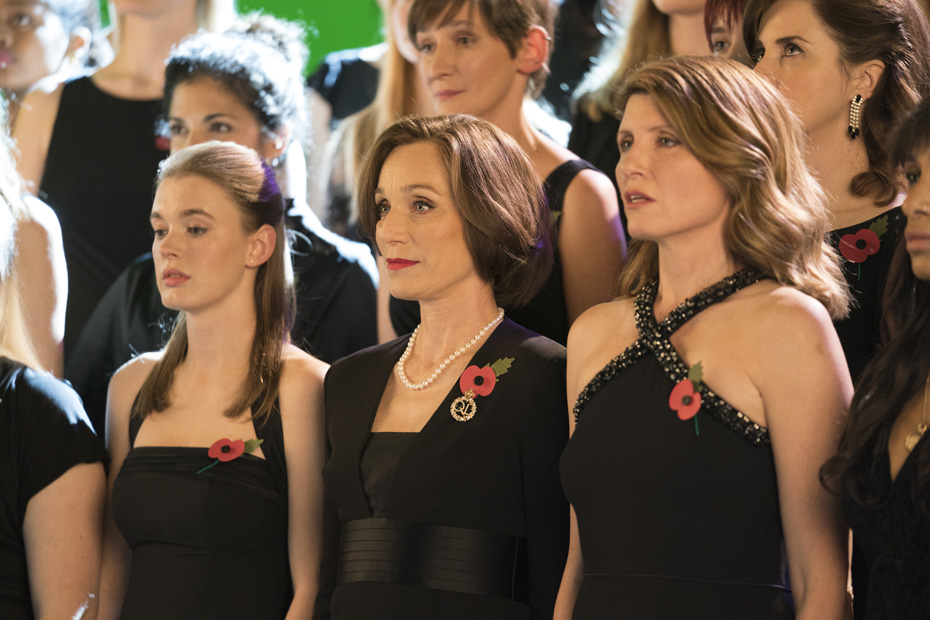 Billy Mack (Bill Nighy) with “Love Is All Around” in Love Actually is not the only Christmas Number One singer to have his own movie. In 2011, the Military Wives choir sold over 500,000 copies of “Wherever You Are” in one week to be Christmas No. 1 in the UK. Simon Cowell was cowed. Military Wives, just released March 6th, is available for rent on Amazon Prime.

What could be more appropriate on Memorial Day than to watch a group of women singing gloriously to relieve stress, isolation, anxiety, and depression while their partners are in Afghanistan? The film is based upon experiences of participants in a British reality TV series called The Choir. “Wherever You Are” is made up of quotes from letters between the spouses. I challenge you not to get misty-eyed when you hear it. I give Military Wives 4.0 Gavels and it receives a 75% Rotten Tomatoes rating with a 6.4/10 IMDb score.

With their significant others deployed to Afghanistan, many struggle to cope. Kate, the colonel’s wife insists they must keep busy. On the other hand, Lisa, the sergeant-major’s wife, thinks fun, read that drinking, is the answer. They settle on a choir. But Kate is all hymns, vocal exercises, education, and Mozart, while Lisa is pop, vocalizing, fun, and The Beatles. They settle into a peaceful co-existence until the group is invited to sing at The Festival of Remembrance–on TV. The casualties from abroad may not be the only ones.

Kristin Scott Thomas is the straight-laced Kate. She first crossed my radar in The English Patient and I’ve followed her career ever since. Similar to her character in Catastrophe, Sharon Horgan is the organizationally-deficient Lisa. Their blow-up just before the big night is as cruel as two people can be to each other, i.e. real. Gaby French, as Jess, performs the solos, quite well, I might add.

The choir singing Ave Maria at a funeral of one of the servicemen is as moving a scene as you will see. While directed by the same gentleman who did The Full Monty, don’t expect the same type film. The music can be real sweet, but the military struggles can be real sad. One critic describe the film as “mash together ‘Sister Act,’ ‘Pitch Perfect‘ and the Lifetime series ‘Army Wives,’ plus add some good old fashioned British patriotism, and you get the entertaining movie ‘Military Wives.'”

Another states “this is a feel-good story, and at the the core of it is coming to terms with the tragedies that inevitably happen in military families, which is brought together in a song of redemption.” I recommend you follow these ladies to The Royal Albert Hall. You won’t always feel good, but the final leg is quite the show. They are “Stronger Together.”